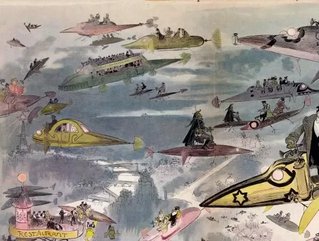 Business Chief talks to Janette Marx, CEO of Airswift, about the effects of digital transformation on recruitment and retention, and what the future holds.

In 1899, French artist Jean-Marc Côté was among a team of illustrators commissioned to create a series of drawings to commemorate the 1900 world’s fair in Paris. The series, originally printed as inserts for cigar boxes (and then later reprinted, but never sold, as postcards - science fiction author Isaac Asimov reportedly owned the only surviving set) took the artists’ best guess at how technology would change our lives by the advent of the 21st century.

The subject matter of En L'An 2000 is, for the most part, spectacularly off the mark. Firefighters battle flames while flying through the air on bat wings, deep sea divers ride giant seahorses through the ocean and students have the contents of history books transferred directly into their brains via psychic helmets. Endearingly hopeful and bizarre, Côté and his fellow artists’ work does betray just how hard it is to predict where the next wave of technological developments will take us.

In 1995, renowned astronomer and author Clifford Stoll wrote in an article for Newsweek that “the truth is no online database will replace your daily newspaper, no CD-ROM can take the place of a competent teacher and no computer network will change the way government works.” He also vociferously argued that there was no such thing as a future where people would buy things over the internet, or read books and magazines online. “Discount the fawning techno-burble about virtual communities,” he continued. “Computers and networks isolate us from one another. A network chat line is a limp substitute for meeting friends over coffee.” 17 years after the article’s publication, Newsweek became an exclusively online publication. Obviously, the future is not something to be predicted lightly.

However, one or two predictions made by En L'An 2000 came partly true. Several of the illustrations portray a world in which a single worker sits, comfortably pushing buttons, as automated machinery does the work of a dozen laborers. In this respect, at least, Côté was entirely on the money. Automation has completely changed the way in which people work, reaching further and further into aspects of our jobs and changing the culture of work forever. While organisations like the Office for National Statistics predict that, in the UK, as many as 1.5mn jobs are at risk of being eliminated by automation, a greater number of thought leaders believe that increased automation (and digitalisation in general) only highlights the continued need for the human element in business.

“There is a lot of automation in sourcing now, a lot of technology that companies use within their applicant tracking systems to interact with people applying for jobs, and engage with them via automated responses,” says Janette Marx, CEO of Airswift. “The piece that's often missing is the personal touch.” Founded in 1979, Airswift is an international workforce solutions provider within the energy, process and infrastructure industries. Headquartered in Houston, Texas, the company has over 800 employees and 6,000 contractors operating in more than 50 countries. “We're specialists in industries where companies, no matter what country they're in around the world, have the challenge of trying to source the right talent,” Marx explains. “We're not only experts in identifying the right talent for our clients, but also experts in mobilising that talent wherever it’s needed. Whether it's locally, nationally or globally, we do everything from making sure people have a place to live, feel that they are welcomed into a new country and understand the culture, to helping find schools for their kids.”

Airswift partners with some of the largest companies around the world to solve talent sourcing, recruitment and retention challenges in any number of new and existing markets. In terms of the ability to comment on the effect of digital transformation and innovation on the modern workforce, few are in a better position than Marx. “The biggest change in the talent sourcing world is, if you take a step back, how digital transformation will change the interaction between employer and future employee,” she says. “From a sourcing point of view, the medium has changed so much, from ads in the newspaper to online job boards to the invention of LinkedIn and so on. There are a lot of different ways to attract candidates to different companies.” The increased digitalisation of the recruitment space, according to Marx, has radically altered the size of the net that companies can cast. This is where automation becomes so important. “We can use chatbots and other types of automation to make sure that we're reaching the right audience. There are companies using chatbots to pre-screen candidates to make sure they are qualified before doing an actual interview,” elaborates Marx. “It's really broken down a lot of barriers and globalised our outlook, especially if the skill you’re sourcing is niche, specific or hard to find.”

However, at the heart of recruitment is still the human relationship. “When a person decides to leave a job to go to another job, that's a really big decision. Facilitating and navigating the thought process surrounding that change is where real recruiters come in to help connect the dots between the employer and the job seeker,” Marx explains. “The digital world is coming into it, but you still need a human element in the recruitment process.”

Digital transformation is not only changing the way that companies attract talent. Marx notes that, as the human capital space is increasingly reshaped by the accelerating pace of innovation, the strategies and values companies use to retain their talent are becoming increasingly people-centric. “Retention is a really important piece, especially with where the unemployment levels sit around the world right now,” she says. “There are a lot of measures companies can take to increase their retention and employee engagement, to really train and develop their people.” More and more, Marx finds, career progression is the number one reason people switch jobs, with opportunities for training and development coming a close second. The global workforce is as aware of the pace of change as anyone, and prioritises personal development in order to keep up.

In the same way that Côté and Stoll struggled to accurately envision where technology would take humanity, the next five to 10 years are a time shrouded in mystery, brimming with the possibility of rapid advancements and new challenges to face. Marx herself is brimming with optimism. “The future is going to be really, really interesting with regard to how we balance human interaction with technology and how the technology will support that overall experience,” she enthuses. “I can’t wait to see where the next five years take us, particularly in terms of communications. It would be nice to have holograms,” she says, somewhat wistfully.