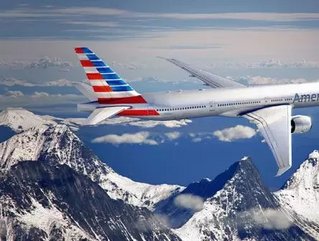 American Airlines announced today its new logo and imagery for the exterior of its aircraft fleet. To be applied to its Flagship Boeing 777-300ER plane expected to take its inaugural flight on January 31st, American Airlines is excited about the imagery in anticipation of the delivery of its 550 new aircraft to its fleet.

"Since placing our landmark aircraft order in July of 2011, we've been building anticipation toward a moment in time when the outside of our aircraft reflects the progress we've made to modernize our airline on the inside," said Tom Horton, American's Chairman and CEO. "While we complete the evaluation of whether a merger can build on American's strengths, we remain steadfast in each step we take to renew our airline, a step we take with great respect for our name American. Today marks important progress in that journey as we unveil a new and updated look for the first time in more than 40 years."

The new aircraft is lighter and features composite materials that must be painted to apply the American Airlines brand. American Airlines explained that since the renowned polished metal look of its planes was no longer an option, it took the paint selection process seriously to honor the airline’s “silver bird” legacy. This resulted in silver mica paint chosen as American’s way to give deference to its silver heritage.

"Our new logo and livery are designed to reflect the passion for progress and the soaring spirit, which is uniquely American," said Virasb Vahidi, American's Chief Commercial Officer. "Our core colors -- red, white and blue -- have been updated to reflect a more vibrant and welcoming spirit. The new tail, with stripes flying proudly, is a bold reflection of American's origin and name. And our new flight symbol, an updated eagle, incorporates the many icons that people have come to associate with American, including the 'A' and the star."

American Airlines parent company, AMR Corporation, filed for Chapter 11 bankruptcy in November 2011 and the airline has been trying to restructure and recover ever since. This announcement of a rebrand is speculated to bring American Airlines in a better light to its customers and the company has introduced a number of initiatives in its forward thinking strategy  under this effort. This includes its new aircraft fleet , an expanded international service and easier access to information for employees through introduction of tablets into operations.