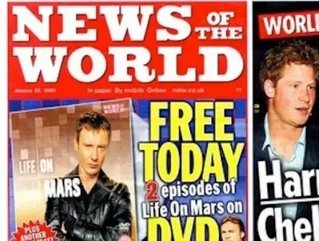 Media powerhouse News International announced on Thursday it is shutting down the “News of the World” tabloid, which is the newspaper at the center of a British phone-hacking scandal. James Murdoch, who heads the newspaper’s European operations and is also the son of media mogul Rupert Murdoch, said the 168-year-old newspaper will publish its last edition this Sunday. The scandal has cost the paper its reputation and has driven dozens of companies to pull their ads.

According to several reports, the Rupert Murdoch-owned tabloid is accused of hacking into the cell phone messages of victims ranging from missing schoolgirls to grieving families, celebrities, royals and politicians in a quest for attention-grabbing headlines. Police on the other side of the pond say they are researching 4,000 names of people who may have been hit by the paper.

The Sunday-only newspaper has acknowledged that it hacked into the phones of politicians, celebrities and royal aides, but in recent days, the allegations have expanded to take in the phones of missing children, the relatives of terrorist victims and families of soldiers killed in Afghanistan, according to MSNBC.

James Murdoch addressed his staff and said if the allegations were true, "it was inhuman and has no place in our company." Murdoch also says, “Wrongdoers turned a good newsroom bad and this was not fully understood or adequately pursued."

The News of the World is one of the longest running papers and has been published since 1843. Rupert Murdoch acquired the newspaper in 1969 and it is currently the best-selling English-language paper in the world with a circulation of more than 2.6 million, according to recent figures.