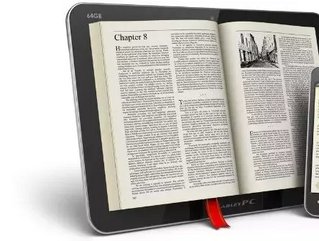 Oh, Apple. Say it isn’t so! Our favorite technology giant has done us dirty in the worst possible way. Apple was not only involved in, but led a conspiracy to drive up the price of e-books. Hitting us right where it hurts, Apple.  I don’t even know what to do with this information.

According to the Los Angeles Times, Apple was “aggressively pressuring publishers to raise prices and weaken Amazon.com.”

“The Plaintiffs have shown that Apple conspired to raise the retail price of e-books and that they are entitled to injunctive relief. A trial on damages will follow,” Cote wrote in her opinion.

The publishers in on the scheme were, Penguin, HarperCollins, Simon & Schuster, Macmillan and Hachette Book Group.

When the Company arrived in the e-book market in April 2010, Apple offered publishers a way to fight back against Amazon by raising the prices of e-books. Prices went up shortly thereafter, and Apple negotiated 30% of the profits, argued federal prosecutor Mark Ryan.

The government showed that Apple executive Eddy Cue was in contact via email and phone with representatives from the five publishers who signed agreements with the Company, with ultimately led the publishers to change how they distributed and priced books.

Apple’s argument was the phone calls were non-threatening negotiations and that it did not conspire with any of the aforementioned companies. Instead, Apple blames Amazon, which sells the majority of e-books, claiming Amazon is a monopoly that is hurting consumers. Apple said it was going to trial, rather than settling, because it did nothing wrong.

Assistant U.S. Atty. Gen. Bill Baer, who is in charge of the Justice Department’s Antitrust Division, called the ruling "a victory for millions of consumers who choose to read books electronically."

"Companies cannot ignore the antitrust laws when they believe it is in their economic self-interest to do so," he said. "This decision by the court is a critical step in undoing the harm caused by Apple’s illegal actions."

In her ruling, Cote wrote that there is no doubt that publishers conspired to raise the prices of their e-books. They were afraid, she writes, that Amazon’s $9.99 price point for bestsellers would completely upset their business model. But Apple was the ringleader - publishers had tried to get Amazon to raise prices in 2009 and 2008, and failed by themselves.

“Apple was a knowing and active member of that conspiracy. Apple not only willingly joined the conspiracy, but also forcefully facilitated it,” she writes.

This is one of the biggest antitrust cases tried by the Justice Department over the last decade. Apple has argued that a ruling against it would set a dangerous precedent for other tech firms trying to strike content deals. Cote addressed that fear in her ruling, stressing that it only pertains to the details in Apple’s case, and not to other companies.

“While a Court must take seriously a prediction that its decision will harm our nation’s economy, particularly when made by skilled counsel on behalf of an esteemed company, it is difficult to see how competition will be stifled by the ruling in this Opinion. This Opinion’s findings arise from the specific events that unfolded in the trade e-book market as 2009 became 2010. It does not seek to paint with a broader brush.“