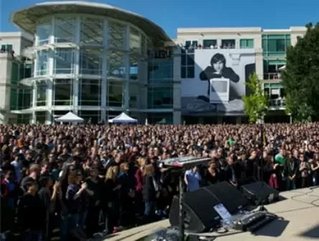 White curtains were drawn across the iconic glass storefronts of Apple retail stores across the country as the Apple campus at 1 Infinite Loop in Cupertino, California prepared for a company-wide celebration of the life of co-founder and former CEO Steve Jobs.

The service for Jobs, who died October 5 at age 56 after a battle with pancreatic cancer, was webcast to Apple employees worldwide.

Current CEO Tim Cook sent an email to Apple employees a few days ago, stating that the company wanted to “take time to remember the incredible things Steve achieved in his life and the many ways he made our world a better place.”

During the memorial, Apple played its famous “Think Different” commercial from 1997. Employees held back tears as the commercial’s opening lines, written by Jobs, echoed across the quad: “Here’s to the crazy ones, the misfits, the rebels, the troublemakers…”

After performances by Norah Jones and British band Coldplay, front man Chris Martin told the crowd at the close of the service to “get back to work because that’s what Steve Jobs would have wanted.”