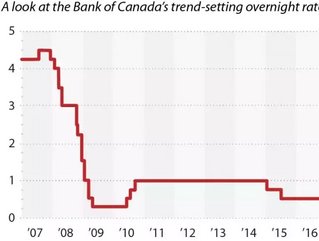 In the wake of the US-China trade war Canada holds steady over-night interest rate at 1.75%.

Bank of Canada’s governor Stephen Poloz has announced that interest rates will be kept at 1.75%. The bank has stated that the escalating trade war between the US and China is having wider implications for the global economy than expected during its July Monetary Policy Report.

The next interest rate announcement is due on 30 October 2019, and the bank has said it will “pay particular attention to global developments and their impact on Canadian growth and inflation.”

Statistics Canada reports that GDP has expanded by 0.2% overall for the fourth month in a row, with the service sector making up for losses in the goods-producing sector. Wholesale, construction, mining, oil and gas, as well as the finance and insurance industry, grew despite a 1.4% decrease in manufacturing, with a surge in exports being a large contributor to this growth. The data published by Statistics Canada showed that the national economy has exceeded the Bank of Canada’s 2.3% growth projections by 1.5% during the second quarter with the Bank expecting a further 1.5% in the third quarter.

With wages, jobs and inflation remaining steady and gross domestic product numbers exceeding forecasts, the Canadian economy continues to grow at its fastest pace in two years. This rate of economic expansion is expected to slow down in the second half of the year, but the Bank of Canada has not made any hints of future changes, even as its counterparts such as Westpac Banking Corp, Australia and New Zealand Banking Group and Commonwealth Bank of Australia have all eased borrowing rates or made mention of their intention to loosen monetary policy.

US president Donald Trump has called for reductions in interest rates from Jerome Powel, Chairman of the Federal Reserve, to boost the US economy amidst fear of a coming recession. Warnings of retailers raising prices due to the US-China trade war may push inflation even higher.

"With the Fed likely easing in September and then again in October, it looks as if it would be the prudent thing to do for the Bank of Canada to take up some insurance as well," BMO's Benjamin Reitzes said while speaking to Reuters.