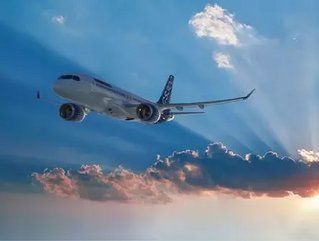 Bombardier Aerospace announced today the signed letter of intent from Atlasjet to acquire 10 CS300 aircraft with further options to take on five more.

The agreement is expected to bring in $776 million USD for Bombardier for the first firm-order contract, increasing $1.18 billion USD if Atlasjet purchased an additional five jetliners.

“There are several reasons why we selected Bombardier’s all-new CS300 aircraft,” said Murat Ersoy, Chairman, Atlasjet. “The CS300 aircraft has the best economics in its class; it is well suited for our unique operations in hot temperature environments; and, based on its performance and economics, it will return the highest profitability in strategic markets. With its offering of widebody comfort in a single-aisle aircraft, it is the right-sized platform for us.”

“We consider airlines operating in Turkey and the Middle East to be prime candidates for CSeries aircraft,” said Guy C. Hachey, President and Chief Operating Officer, Bombardier Aerospace. “Airlines in the region face revenue and performance challenges as their current fleets are composed mainly of jet aircraft larger than the CSeries aircraft. The CSeries aircraft gives airlines a right-sized solution optimized for their environment and operation.”

Earlier this week Bombardier announced its expansion and new location in Dubai to further support Middle East and Africa operations. Opening a Bombardier Commercial Aircraft regional sales and marketing office, this announcement of the Atlastjet agreement comes directly from the new office.  Bombardier expects, in its 2011-2030 forecast, that the office will originally start as a small base to grow to capture seven per cent of worldwide deliveries, specifically serving the 100-149 seat market.