The Business of Fame in Hollywood 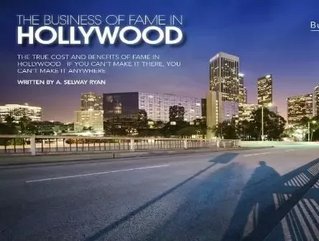 Click here to read this story in the March issue of Business Review USA!

Written by A. Selway Ryan

Us Weekly likes to quote a poll stating that a healthy majority of Americans would rather be famous than rich.  There are a lot of good reasons why, not the least being that fame tends to breed wealth.  But the truth is, it’s more than that.

For over fifty years, smart people have written extensively on the subject of celebrity: how it informs our national consciousness, how it degrades us, how it makes us ridiculous.  From cultural critic Theodore Adorno to historian Daniel Boorstin, media theorist Marshall McLuhan to inventor of the TV Philo Farnsworth, people holding nice pens in overstuffed armchairs have made it clear that they don’t like celebrity culture.  And it’s safe to say they wouldn’t be too happy about that poll.

Most famously of all, the pop art movement fathered by Andy Warhol zeroed in on fame as the mother and child of all social ills – and, tragically or not, a hell of a lot of fun; even (and especially) if you hate it.  “Everyone gets their fifteen minutes of fame,” he declared, with the hip cynicism so definitive of the era.

And yet…not so much.  Statistically, fame is still exceedingly rare – rarer still if the level of fame is taken into account.  There are hundreds of millions of people in this country, and at most ten or twenty thousand who could be deemed recognizable to a large group.

If we take celebrity to be a pyramid, say with the President at the top and reality show participants at the base, America isn’t Giza; it’s Cairo.  It just may not seem that way when you’re in the King’s Chamber.

All hipness and cynicism aside, one of the obvious reasons we all want to be famous is that we aren’t.

You may or may not have heard of Bo Burnham – he’s a star comedian born in 1990.  (And I had just made my peace with the fact that LeBron James is younger than me.)  Know how he got famous?  He posted a video from his bedroom to YouTube.

"He's definitely the youngest comedian I've worked with – he was getting ready for his SATs when I called – but the quality of his writing is amazing," said super-agent Douglas Edley, who represents stars ranging from Drew Carey to Dave Chappelle.  His assistant referred him to Burnham after she saw his video online.  His material is mostly dirty novelty songs.

When film comedy patron saint Judd Apatow saw him perform, the set surely reminded him of his protégée Seth Rogen’s energy and vitality.  (With Apatow’s support, Rogen starred in his first smash hit at 24, with little prior movie experience – Knocked Up launched both their careers into the stratosphere.)  Burnham is now working on a movie that Apatow will produce.

It’s a different world out there for people who want to be famous, and it’s a strange road for the few who travel very far towards the goal.  Lionel Barrymore had to master the medium of theater before he could get a crack at the silver screen; Humphrey Bogart had to climb through the ranks of the studio talent system for decades before he was truly famous.

And that’s if you’re an actor, where obedience and adaptation are the watchwords.  For writers and directors, the climb is steep enough that it was nearly impossible to break through to prominence for the first half-century of the medium.  That’s why so many early filmmaking icons were all-rounders, like Chaplin or Keaton.

By the time John Cassavettes came along, it became clear that it was possible – albeit very difficult – to get famous(ish) doing it yourself.  It got easier, but by the time veteran actor and director Steve Buscemi started contributing to the 90s indie renaissance, the two-tier system was firmly in place.  What Rudyard Kipling said about the hemispheres could easily be applied to rival filmmaking methods in America: “East is east, and west is west, and never the twain shall meet.”

Buscemi – who is sweeping through the awards season on the strength of a powerful performance on HBO’s Martin Scorsese-produced Boardwalk Empire – doesn’t mind.  "I think it's good not to be on top of the world,” he says.  “It must be lonely being on top.  I'd rather be with everybody else."

After Burnham signed with Edley, he went on an international tour with a popular one-man show.  His SAT’s finished, his college applications abandoned, he traveled the world (mostly college towns) enjoying the adulation of thousands of screaming fans.  He knew many more existed, but "I only see numbers on a screen," he says.  "I don't interact with people much."

You don’t have to go very far in the history of celebrity to find people who were particularly suited to their fame.  Aside from being a once-in-a-generation beauty, Marilyn Monroe was an orphan.  She was raised without a loving family around her, and suffered such severe bouts of loneliness and depression as a child that, for a time, she believed she was invisible.

It’s far too easy for the tens of millions of Americans who read Us Weekly, watch E!, and surf TMZ to feel like they’re invisible.  Their community does not consider them worthy of healthcare if they’re not working at a good job.  Their schools often forget about them.  Their voices don’t matter much in the stratified political process.  They don’t know too many people, and not too many people know them.

One reason we want to be famous is that we aren’t already.  But another reason might be that a lot of us feel pretty alone – and that’s one thing a famous person never has to be.