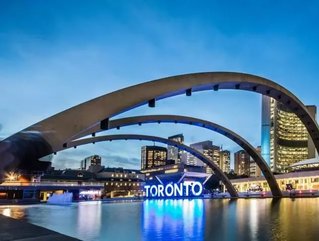 The purchase agreement, signed between Cadillac Fairview (CF) and First Gulf, will focus on the reuse of an existing Soap Factory during its first stages. Cadillac Fairview has already started speaking to prospective tenants about the opportunity.

East Harbour’s transit infrastructure connects the Lakeshore and Markham/Stouffville GO train lines and once the Ontario Line subway SmartTrack is completed, that too will pass through the hub. With a capacity to serve an estimated 32,000 commuters per hour it will alleviate traffic issues around Union Station and provide transportation for the prospective work force for the region.

First Gulf has on its 2018 plan with Toronto city council to develop the east harbour master plan, which will provide capacity for 70,000 employees. The five-tower scheme in downtown Toronto’s South Core, which includes Maple Leaf Square, ICE condominiums and 16 York street office, which is currently under construction, to capitalise on a forecast need of 45mn square feet of commercial space by 2041. Future growth potential has also been supported through a multi-modal transit hub incorporating SmartTrack services.

First Gulf CEO David Gerofsky stated: "The shared vision, developed in collaboration with community and government stakeholders, establishes East Harbour as a key driver of economic growth and competitiveness for Toronto. We know the project is in good hands with Cadillac Fairview and we look forward to seeing our collective work realized."

In recent years, CF has purchased sites around financial cores to encourage investment in high-potential commercial areas. This strategy was previously used in Montreal, with a CA$2bn development of the Quad Windsor plan, intended to revitalize Windsor Station, five residential towers and two office blocks, including Tour Deloitte, which opened in 2015.

"CF is thrilled to assume stewardship of the East Harbour project and all of the tremendous potential that it represents," said John Sullivan, President and CEO, Cadillac Fairview. "Our commitment now is to sustain the momentum toward realizing the vision of a vibrant new employment and entertainment destination for Torontonians."

When speaking of the prospective development, Cadillac Fairview’s Executive Vice President of Development, Wayne Braise said "Establishing East Harbour as an employment destination with multiple uses and amenities will be based on infrastructure that is well-integrated with its surroundings, well-connected with a range of transport options, resilient to long-term changes in the economy and our climate, and responsive to innovations in building systems technologies,"