Celebs and volunteers build in LA with Habitat for Humanity 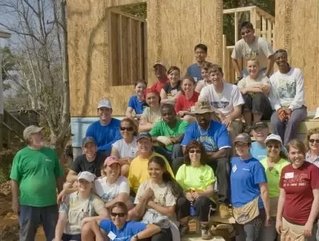 More than 1,000 celebrity, entertainment industry, and executive volunteers are expected to turn out over the next week to help Habitat for Humanity of Greater Los Angeles (HFH GLA) and its sponsors build eight affordable, sustainable homes as part of the Hollywood for Habitat for Humanity (HFHFH) program. The week-long build sponsored by Lowe's, will take place June 10 - June 18 and will feature special build events including Executive Build, four Hollywood build days and the Lowe's Power Women, Power Tools build. This event will bring together some of the most powerful voices in Hollywood and top corporations to address the affordable housing crisis in Los Angeles and provide a hands-on solution for families in the City of Burbank. Other sponsors include Bernards, Celebrating Home and The Walt Disney Company.

"This Build-a-Thon will engage over 1000 corporate and civic leaders to build eight homes that will be the foundation for a strong, new neighborhood in Burbank," says Erin Rank, President and CEO HFH GLA.   "Those who participate will not only lend a hand up to these deserving families, they will leave feeling empowered and inspired, knowing they have helped bring positive change to our community."

Habitat for Humanity of Greater Los Angeles is teaming up with the Burbank Redevelopment Agency and the Burbank Housing Corporation to build homes in partnership with eight hardworking, low-income homeowners. The Keeler/Elliott Homeownership Development will include seven new townhomes and one rehabilitated single-family home.  Participating celebrity and entertainment industry volunteers will help build the homes alongside HFH GLA partner homeowners during the week-long Build-A-Thon. The new development will improve the lives of the homeowners and the surrounding community by making public infrastructure improvements and creating jobs.

Lowe's, a national Habitat partner since 2004 gave a $250,000 grant for the build. Lowe's will also provide hands-on support throughout the week with teams of employee volunteers working on-site each day and leading "how-to" clinics that teach basic building skills for participating volunteers.

"Lowe's understands the needs of the communities where we live and work, and the opportunity to get out into those communities and build homes for local families shows us first-hand the impact Habitat makes on people's lives every day," said Jeff Starnes, Lowe's Regional Vice President. "Raising our hammers and offering our expertise as Lowe's to other dedicated volunteers is just as important and rewarding as giving the grant necessary to build homes for communities in need."

Additional funding and volunteer support is provided by Bernards, Celebrating Home, The Walt Disney Company and other valued sponsors.  Representatives from the major sponsors will be on hand during the HFHFH Build-A-Thon.  Celebrating Home President Heather Chastain will be speaking at the Lowe's Power Women Power Tools Build day.