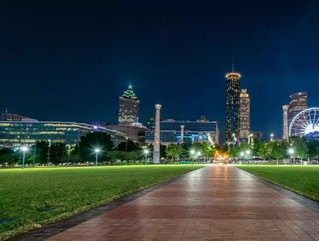 Welcome to Atlanta, a city of rebirth, renewal and growth. This month, Business Chief is exploring the home of Coca-Cola, UPS and the startup hub that’s putting the city’s ecosystem on the map.

Atlanta, Georgia, the capital and economic heart of its state, is a city steeped in the history of the American South. Its sprawling metropolitan area is home to almost 6mn people and its Hartsfield-Jackson International Airport has been the biggest and busiest in the world since the start of the century. Every year, more than 107mn passengers arrive at or depart from its terminals.

Originally Creek and Cherokee Native American territory, Atlanta was first established at the end of the 1830s, as the terminus of a Government-built railroad leading to the Midwest. A wooden stake marking the end of the rail was driven into the ground and, over the next decade, homes and storefronts grew around it until, by the 1850s, the town had become the primary rail hub for the entire American South.

The great seal of Atlanta depicts a phoenix rising from the ashes, tribute to the city’s tumultuous past. During the American Civil War, Union troops leveled Atlanta, burning thousands of buildings to the ground. The city’s story is one of rebirth, resurgence (the city’s motto) and modernisation. Post-Antebellum Atlanta was recreated as the gateway to the modern South. Today, Atlanta is home to some of the country’s most elite universities (including Georgia Tech) as well as more than 150,000 businesses, of which many belong to the Fortune 500 and 1,000.

Atlanta is home to leading logistics company United Parcel Service (UPS), as well as Home Depot and Delta Airlines (which accounts for around 70% of the flights leaving the Hartsfield-Jackson International Airport). Alongside hundreds more, they are responsible for Atlanta’s GDP exceeding $385bn. However, there is one company perhaps more synonymous with the city than any other.

Founded in 1892 in response to Georgia’s newfound participation in prohibition by pharmacist John Pemberton, the Coca-Cola Company has been at the heart and soul of the city for more than a century. During the great depression, when the city government was nearing bankruptcy, the Coca-Cola company helped to bail out the city’s deficit. Today, the company employs more than 7,000 people in the city, where it also has its iconic museum, home to the vault where the secret formula is allegedly kept.

There is more to Atlanta, however, than global conglomerates and gargantuan logistics operations. Its startup scene is young, vibrant, and working to change the way the city, the state and the nation does business.

When David Cummings, founder of B2B marketing automation company Pardot, came to Atlanta in 2002, the city had next to no startup scene. A decade later, following the sale of Pardot, Cummings took it upon himself to change the face of the city’s entrepreneurial community. In 2012, alongside David Lightburn, Cummings created the Atlanta Tech Village (ATV), the fourth-largest tech space in the US which, within its first year, was host to more than 180 startups.

Today, the ATV works to continue creating and supporting a community of innovation, with the goal of generating more than 10,000 jobs in a bid to bring Atlanta’s scene from the 26th best in the world to the top five.

“When I first moved to Atlanta in 2002, I had a really hard time finding other tech entrepreneurs to connect with,” said Cummings in an interview with Atlanta Magazine last year. “A lot of entrepreneurship is driven by serendipitous interaction with people who are good with one thing helping other people that are good at something else.”

The methodology seems to be working. In September, the ATV announced that its startups had collectively raised more than $839mn since 2012, and is on track to hit $1b in 2020. “We need more big-time success stories,” said Cummings. “That’s the next phase for Atlanta.”

Let’s meet some of the companies that currently call ATV home, and are fighting to carve out a place for themselves in the ever-evolving history of the city.

Sales engagement platform SalesLoft helps organisations to improve customer experience. Founded in 2011, this ATV occupant also now has offices in New York, London and Guadalajara, as well as being named the 7th Fastest-Growing Technology Company in North America by Deloitte.

GrantScribe is a free service that matches businesses, nonprofits and startups to relevant funding opportunities using a grading system and AI.

There are hundreds of other startups working at the ATV, on everything from fintech and application design to cybersecurity and crypto, as well as thousands outside its walls, all striving to make themselves and the city they call home a true American success story.