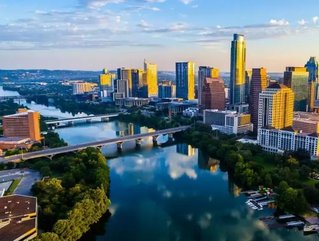 Austin, Texas, with a population of nearly 948,000 as estimated by the Census Bureau, is the fastest-growing large city in the US, according to Forbes. The capital of Texas is also the country's second most populous, after Phoenix, Arizona, and is the economic and cultural epicenter of the Austin-Round Rock metro area with an estimated population of over 2mn people.

Austin is much more than a quickly-expanding metropolis. It's also a city that's known as a hotbed of musical talent and its year-round warm weather. Austin is also routinely recognized for a host of awards and accolades. For example, in 2017 alone:

Other notable accolades include Forbes’ ranking of the city in 2016 as number one on its list of "Cities of the Future" and the FBI noting that Austin was the second safest major city in 2012.

Residents of Austin comprise a diverse mix of college students, blue-collar employees, musicians, government workers and high-tech employees. While the city's official slogan denotes it as "The Live Music Capital of the World", it also adopted the moniker of "Silicon Hills" during the 1990s as tech and development firms flooded the region. Numerous tech-oriented Fortune 500 companies base their headquarters of a regional office in the city, including:

A global leader in both networking and IT, Cisco helps companies connect, collaborate and communicate with each other and people around the world with their transformative products and practices.

For over a century, IBM has been fueling an era of constant innovation. With nearly $80bn in revenue in 2016, the technology company continues to change the way the world does business.

As one of the leading technology companies in the United States, Google provides an array of internet-related services that include cloud computing, hardware, online advertising technologies, software and search.

An American company, PayPal provides an online payment system that facilitates the transfer of money and serves as an alternative to traditional banking services.

Dell, a company with its headquarters in Round Rock, a suburb of Austin, delivers trusted technology solutions that are designed to help communities, countries, businesses and consumers around the world achieve more.

Small business in Austin: putting the city on the map

While Austin is a highly desirable and convenient location for global conglomerations, there is also plenty of opportunity for small businesses that fill a unique niche. Below are just a few of the many notable examples found thriving in the city:

TreeHouse is a home improvement store with a difference. Its focus is on “smart” homes: making sustainable, healthy and thoughtful homes for everyone. Through a mix of great design, cutting-edge technology, progressive products and dedicated staff, TreeHouse delivers customized solar power, lighting, weatherization, remodeling and other services to Austin and the surrounding area. The company is also a significant charitable presence in the city.

Since 2012, Mitscoots has been changing the apparel business with their 100% American-made socks, tanks, beanies, gloves, t-shirts and scarves. Much like the Toms business model, Mitscoots donates an item to the homeless for each one they sell. At Mitscoots, though, this is taken one step further by employing those individuals who are transitioning from homelessness to package up the orders in the Austin location.

Located in the heart of East Austin, Springdale Farm's mission is to research sustainable urban farming and agricultural practices and educate the local community about them. Its products, which include candles, locally-grown produce, jams, eggs, bath products and more, are made with 100% natural ingredients.