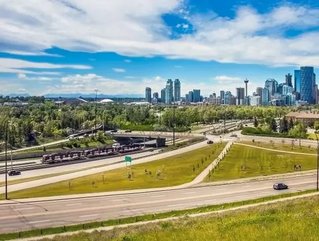 Business Chief tours the ‘sunniest city in Canada’ and takes a look at its dominant oil and gas sector, particularly the inroads that industry leaders are making in sustainable energy

Nestled in the south of Alberta and originally inhabited by the pre-Clovis people who had lived there for over 11,000 years, the area that would later be called ‘Calgary’ received its first Europeans settlers in 1873. In 1884, when its population had grown to 4,000, it was formally proclaimed a city and named after Calgary on the Isle of Mull in Scotland. Today, the city encompasses an area roughly the size of New York City, yet, with a population of 1.3 million, only has one-eighth of the density. Previously described by Forbes as the cleanest city on Earth, Calgary also enjoys an average of 2,400hrs of sunshine a year, making it Canada’s sunniest city. Known for its annual ‘Calgary Stampede’, in which more than one million people come together for rodeos, parades and concerts, the city has earned the moniker of ‘Cowtown’ for this Wild West association. Despite this reference to the past, Calgary is actually a very young city: the average age for its citizens is a spry 36.

The city houses the second-largest quantity of corporate headquarters in Canada after Toronto, with over 800 of the largest companies in the country represented there. Holding an overall GDP of CA$125.76bn, Calgary has the highest GDP per capita ($84,630) in Canada, as well as the most millionaires per capita. With an economy primarily centred on the energy sector, Calgary also provides high employment in finance and manufacturing. In 2018, mining, quarrying, oil and gas extraction alone contributed $50.9bn to the city’s overall GDP, roughly 44.5% of the total, with financial services contributing another 12.7%. Despite the relative dominance of these industries, Calgary is determined to reduce its reliance on these core sectors and expand its interests. To this effect, the city has started to build a portfolio of more diverse economic activities, including technology, aerospace, retail, tourism and finance.

With a revenue of $46.3bn and providing employment to almost 13,000 people, Enbridge is the largest Calgary-based company currently operating. Founded in 1949 as the ‘International Pipe Line’, the company has grown to be a dominant force in the oil & gas industry. Enbridge has a range of projects across North America, transporting 20% of the gas used in the USA alone. Listed on both the TSX and NYSE, the company was also among the first to recognise the potential of renewable energy. It now holds a portfolio of investments including LNG (liquefied natural gas) and offshore wind farms. Since 2002, Enbridge has committed over $7.8bn to such developments, including 21 wind farms, four solar energy operations, one hydroelectric facility and one geothermal project. The company estimates that it can generate approximately 4,121MW of carbon-neutral energy.

Originally founded in Montreal as the ‘Sun Company of Canada’ in 1919, the company now known as Suncor Energy eventually headquartered itself in Calgary. Turning over a revenue of $38.5bn and employing over 13,000 people, Suncor specialises in synthetic crude produced from oil sands. It is the fifth largest North American energy company and one of the largest independent energy companies in the world. Using revenues generated from its oil sands operations, Suncor has been developing interests in biofuels since 2006. Canada’s largest ethanol factory (the St. Clair Ethanol Plant) produces 400 million litres of product annually from a base of corn. The plant currently employs 63 full-time workers, who extract starch from the corn and turn it into ethanol. Displaying circular economic thinking, Suncor states that waste corn is then used as feed for livestock.

Imperial Oil’s history stretches back to 1880 when it was founded in London, Ontario. Owned by ExxonMobil for 122 years, which still holds a 69.6% stake in the company, Imperial’s 1947 discovery of the Leduc Woodbend Devonian oil reef marked the start of a renaissance for the Canadian oil and gas industry. The company turned over almost $35bn in 2018 and employs approximately 5,700 full-time workers. Imperial considers its long-term focus on research and technology to be a key aspect of its strategy. Among only a few Canadian energy companies that have built dedicated research facilities, the company has both upstream and downstream capabilities. Its findings have included multiple methods for extracting products from oil sands, heavy-duty oil for colder climates, biofuels and a way to recycle asphalt.

With Calgary constituting a hub for the energy sector, the city, in addition to the province of Alberta, has not been idle in championing sustainable power sources and business opportunities. The province’s Climate Leadership Plan includes a 30% increase in renewable-based electricity by 2030 and government investment in new projects and technologies to advance progress. The options available to investors are full spectrum: wind, hydroelectric, bioenergy and solar, with the latter being particularly viable due to the city’s aforementioned status as the sunniest city in Canada.