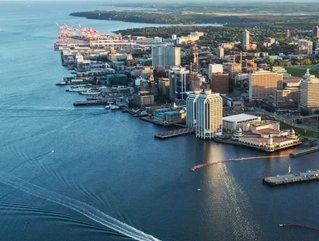 Home to a bustling waterfront, historic heritage buildings as well as a thriving arts, cultural and culinary scene, Halifax is by all means a capital on the rise. In the early days, the maritime city made its mark on the world as an Atlantic trading hub and it has delighted visitors with its unique charm ever since. American travel website TripAdvisor seems to agree; in its 2018 Travelers' Choice Awards, Halifax was named as one of the Top 10 global destinations on the rise. Yet, whilst the Nova Scotian capital is set to become a promising travel destination, that’s not all it has to offer. With local businesses leading the way in areas such as marine defence, fisheries and data analytics, Halifax has also proved to be a burgeoning business hub. Halifax has reams to offer businesses that are looking to get a foothold in the Canadian market with its strategic geographic location meaning the city is near both the European and US markets; it boasts a highly skilled and educated workforce; and on top of this, businesses can be sure of competitive business costs and generous R&D tax incentives. To find out more, Business Chief examines three of the city’s most prosperous industries to dig deeper into Canada’s so-called ‘Ocean City’.

Not only has Nova Scotia’s coastline been shaped by the ocean, it’s people and businesses have too. Nova Scotia Business Inc. says that a massive one-in-five jobs in the province are connected to the ocean, with the ocean industry employing almost 35,000 local people. As well as this, Nova Scotia also boasts one of the highest concentrations of ocean-related PhDs in the world. The ocean economy is a vital one for the region: it provides a key source of food, energy, minerals, health, leisure and transport which hundreds of millions of people depend upon. It also carries financial heft too: including spin-offs, ocean-related industries generate approximately $4.5bn or 12.2% of Nova Scotia’s GDP. With this ocean clout in mind, it’s no wonder that Nova Scotia and Atlantic Canada were chosen as the epicenter of Canada’s Ocean Supercluster - a federally supported initiative that aims to nurture ocean start-ups.

Lots of notable ocean companies call Halifax home but the city’s aptitude is perhaps best encapsulated by the Port of Halifax, a major economic driver for both the city and the province. Indeed, the latest economic impact report produced by Chris Lowe Planning and Management Group, found that the Port of Halifax’s operations provides almost $2bn in economic output every year. Speaking to the American Journal of Transportation (AJOT), Karen Oldfield, President and CEO of the Halifax Port Authority said that this “reflects the incredible hard work and dedication of the many organizations that make up the Port of Halifax.”

A mecca for seafood lovers

Nova Scotia is often touted as Canada’s top seafood export leader. In 2018, the region recorded more than $2bn in exports to over 75 countries. From Atlantic halibut to herring or tuna, the region is home to 178 processing companies that offer access to more than 50 species of high-quality fish and seafood. Leading seafood exporters in Halifax include Biscay Seafoods Canada, Breakers Fish Co., Fisherman’s Market International Incorporated and Merex Incorporated.

Like many cities across the globe, Halifax has worked hard to keep up with the blistering pace of innovation and is now reaping the benefits. Indeed, some of the biggest titans in the technology space are based in Halifax, including IBM, Capgemini, CGI, Citco and DHX Media. “Halifax is simply a great place to establish a business. Building a business here makes sense,” Cal Gosse, Senior Location Executive of IBM Canada told Halifax Partnership. Jay MacIsaac, Senior VP, Atlantic Canada for CGI, also attested to the region’s IT prowess. Speaking to Halifax Partnership he said: “For CGI, Nova Scotia has proven to be a very sound decision regarding the location of our Atlantic Global Delivery Centre, serving the business needs of our clients from around the world.” But why have these technology powerhouses found Halifax to be such an inviting location? It may be partially due to the regions highly educated workforce: Nova Scotia’s universities have 22% more students enrolled, per capita, in ICT related field than the Canadian average and more than two-thirds of Halifax’s working age population has a trade, college, or university designation. On the other hand, it may also be due to the city’s competitive costs: Halifax has the 6th lowest operating cost for digital industries among competing jurisdictions. Elsewhere, businesses may be wooed by Canada’s compatible data laws: the country’s data privacy laws are compliant with Europe’s meaning international companies can easily store data securely in North America. With all this in mind, Halifax is quickly proving to be the perfect location for any global technology operation.