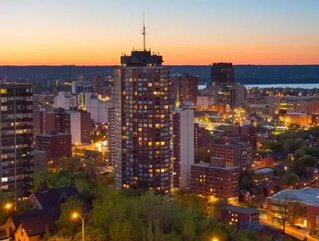 Business Chief examines Hamilton native Doug Putman, hailed as the savior of Canadian vinyl, as he prepares to take over operation of 100 HMV locations across the UK.

Located at the westernmost tip of Lake Ontario, immediately below Mississauga and Toronto, Hamilton is home to approximately 750,000 people. In addition to its proud history of industry and manufacturing — responsible for its nickname of ‘Steeltown’ — the city is also home to the country’s largest botanical garden, which covers an impressive 980 hectares. To this day, the city is home to some of the country’s largest steel companies, including National Steel Car, Canada’s largest manufacturer of rolling stock.

Founded in 1912 by a group of wealthy Hamiltonian investors, National Steel Car today creates 12,500 rolling stock units each year under the leadership of CEO and chairman Gregory J. Aziz. The town is also home to Stelco Holdings, another of Canada’s oldest manufacturers of steel. Although the company filed for bankruptcy in 2007, it was bought by US Steel, taken public and today operates in a diminished capacity refining rolled steel. While Canadian steel production plummeted during the 2007 financial crisis, dropping to less than half of its pre-crash output, according to Trading Economics research, the industry has made strides in the past decade, approaching if not reclaiming the grandeur of one of Canada’s oldest and proudest industries.

Another Hamilton-born businessperson investing in the potential financial returns of the past is Doug Putman, the man hailed by some in both Canada and the United Kingdom as the savior of physical entertainment and the independent record store. From the purchase of local record chain Sunrise Records in 2014, Putman has built a media empire stretching across 82 Canadian locations and, in February, he saved 100 of HMV’s UK locations as the company went into administration for the second time in the last six years. Sunshine records is the only national record chain in Canada, succeeding where so many, including Sam the Record Man, Music World and A & A Records have passed into history.

Capitalising on the Canadian vinyl market

Born in Ancaster, a suburb of Hamilton, the 34-year-old Putman gambled on the success of physical entertainment in 2014, capitalizing on the worldwide, decade-long resurgence of the vinyl market. According to Statista, vinyl sales in the United States rose from 1mn units in 2007 to 16.8mn last year. Following the growth of his Canadian music empire to 82 stores with the purchase of failed HMV Canada locations, Putman told Music Week in February 2019 that Sunrise Records’ operations were profitable at a time when brick and mortar retail is a shrinking industry, and the majority of the world’s population consumes audio media through streaming services like Spotify and Apple Music.

In an interview with the Hamilton Spectator in 2017, Putman explained how he saw the opportunity to turn his own passion for vinyl as a medium into a profitable pursuit. "I like the warmer sound of vinyl and I feel there is a huge passion out there for physical content," he said. "People think the younger generation is all about digital. But the reality is that digital is all they knew growing up and now they are finding vinyl and they love the collecting piece of it. They just didn't have that experience before. And now that they have it, they are becoming hooked and absolutely love it."

The collecting element is a large part of Putman’s operating model for Sunrise. In his Canada stores, he reportedly allows his managers to alter their purchasing decisions based on local demand and preference. In an interview with BBC Radio 4, he explained that “people love to come into a store, have an experience, talk with someone who understands music, loves music, loves video and entertainment. If you think online is the only future, I just think that’s not going to be the case. There’s so much you get from coming to a store that you just can’t get online.”

The Sunrise model also brings a touch of the esoteric to its in-store experience. In an interview with Spill Magazine, Putman talked about the customer’s desire for a deeper, guided experience when shopping for music that independent stores were providing but larger chains were not. While most record shops, he explained, would probably stock a Fleetwood Mac greatest hits album and a copy of the band’s iconic album Rumours (Putman’s favorite LP), he ensures that Sunrise Records offers a more in-depth collection. “Rather than having what I call the ‘basics’, we would offer Tusk and Tango In The Night. It takes it deeper and it gives the customer that assortment in the store.” Regarding his purchase of 100 HMV stores in the UK, he also noted that “it’s all about listening to what the customers want. I think HMV was so used to handling things the same way for years that they didn’t want to change, but we knew going into this that it would be quite the task, so our only option was to do things differently.”

Sunrise Records has its headquarters in Putman’s home district of Ancaster. Also headquartered in the small suburb is his other venture, Everest Toys, one of the largest toys and games distributors in North America, according to the Guardian.

Hamilton has a long and illustrious history of business leaders from Jack Kent Cooke, legendary sports executive and owner of the NHL's Los Angeles Kings, the NBA's Los Angeles Lakers and the NFL's Washington Redskins, to Stephen Elop, the first non-Finnish president and CEO of Nokia. Now, Doug Putman is well on the way to carving out a place for himself among the city’s most celebrated sons.