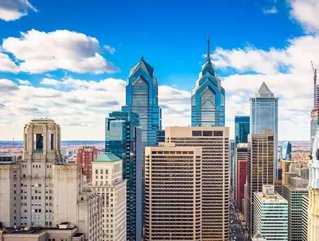 Ranked as one of the ‘top 10 coolest US cities to visit in 2018’ by Forbes, Philadelphia continues to excite all those who visit

Gaining up to 10 industry awards in 2017-18, Philadelphia reigns supreme as one of the most popular historic destinations to visit in the US. The birthplace of Declaration of Independence and the US Constitution, the vibrant city welcomed over 43mn people in 2017, with 38mn visiting solely for leisure purposes.

Previously renowned for its textiles and ironworks, as well as its shipbuilding, locomotives and strength within the oil, glass, coal and steel sectors, the city has sought to modernize and attract new and upcoming talent in a number of new industries. Witnessing eight years of consistent visitation growth, fully supporting its food and beverage, lodgings, transport, recreational and retail facilities, visitor spend within Greater Philadelphia rose to US$7.1bn in 2017, a 4% rise from $6.8bn in 2016.

Designed by Sir William Penn, central Philadelphia remains famous for its historic sites which celebrate its rich culture and history.

Home to a number of important buildings, such as world-renowned UNESCO World Heritage Site, Independence Hall, increasing numbers visit Independence National Historical Park each year to see where the Declaration of Independence and the US Constitution were both established. Welcoming over 5mn visitors in 2016, The Liberty Bell Center is also an iconic symbol.

Indeed, liberty, freedom, choice and independence are all of significant importance within Philadelphia. Whilst it remains the home to a large African American and Puerto Rican community, as well as European immigrants who settled in the city in the 19th century, it is renowned for its key role within the abolition of slavery and the increased demands for social and economic rights for all citizens. The city’s colonial past is still heavily reflected in its architecture, as well as its artistic flair and, of course, its famous culinary delights, all of which local citizens are immensely proud. From a Philadelphia cheese steak to oyster crackers and desserts, famous indoor market Reading Terminal, the city’s oldest farmers market, provides an array of local dishes which all depict its colorful background.

A construction boom in the 1990s and 2000s led the city’s popularity to steadily rise for both corporate and leisure travellers. Since the late 1990s, Philadelphia has witnessed a 74% increase in total available hotel room nights, with over 1.1mn leisure hotel room nights booked in 2017.

Whilst local buses connect visitors to nearby suburbs, the Port Authority Transit Corporation (PATCO) high-speed rail links the city with wider Pennsylvania and travels underground to reach Camden County and New Jersey. Popular with corporate travellers, for those who are conscious of their carbon footprint, the Delaware River Trail is also utilized by cyclists, and connects to the city’s main waterfront. Additionally, pedestrian walkways also cater towards high volumes of traffic.

The city remains keen to reflect its cultural importance through its lively entertainment scene, topped off with stunning sunsets and communal spaces. Utilized by many of the city’s residents and situated close to Benjamin Franklin Bridge, Race Street Pier is perfect for those who want a scenic spot to relax and hosts a number of local activities. Additionally, famous green spaces, such as Fairmount Park which spans 2,050 acres, and The Navy Yard remain iconic spots.

For those who wish to study in the city, Philadelphia and its surrounding areas boast some of the most prestigious educational establishments in the US. Popular majors in nursing, finance and marketing continue to dominate, and the University of Pennsylvania remains the largest in the city with over 8,500 graduates per year. However, Temple University and Drexel University are not far behind. Furthermore, the Pennsylvania Academy of Fine Arts also remains the oldest art school in the US and receives a high number of applicants each year.

As Philadelphia continues to employ over 678,000 citizens, the local economy is flourishing. Whilst the median household income in the city is relatively stable at $41,449, male workers earn up to $65,993 on average, in comparison to $48,584 for female workers, with an average commute time of 32 minutes.

A recent report has also highlighted that although the most common roles lie within administration, the city employs high numbers within healthcare, health IT and social assistance roles, as well as educational, firefighting, legal and retail services, which all offer high salaries.

Situated in Chesterbrook, Pennsylvania, leading pharmaceutical distributor AmerisourceBergen gained $153bn in revenue in 2017, and is set to move to a new headquarters in Conshohocken, Montgomery County, to cater towards its ongoing expansion.

Supporting over a thousand residents, the move will provide a significant boost to the local economy and support local healthcare providers and educational establishments in retaining its position as one of the top employers in Philadelphia.

Listed as a Fortune 500 company, Aramark gained $14bn revenue in 2017 and remains headquartered at the Aramark Tower in Philadelphia. The business has recently announced its decision to sell its Healthcare Technologies (HCT) business for $300mn to TRIMEDX, enabling it to focus solely on its core food, facilities and uniforms businesses.

Crossing the Benjamin Franklin Bridge from Philadelphia to the company’s historic headquarters in Camden, the Campbell Soup Company has announced that it is set to close its last Canadian factory at the start of the year, bringing its manufacturing completely back into the US. The company remains iconic in the city, and employs up to a thousand workers.

One of the largest telecommunications conglomerates and indeed mist influential companies in the world, Comcast makes its home in Philadelphia. Operating a plethora of digital channels, it operates a number of offices in the US, and has become the main anchor tenant in the city’s the Comcast Center. The company’s subsidiary, Comcast Sports Ventures (Comcast Spectacor) has also recently reached an agreement to introduce 100% renewable energy to Philadelphia’s Wells Fargo Center, home to the National Hockey League’s Philadelphia Flyers.

Maintaining Philadelphia’s position as a leader in a number of process fluids, chemical specialties and technical expertise, Quaker Chemical Corporation has cemented its presence in over 20 countries and 35 locations, with a strong foothold within China, India and Brazil. Located in Conshohocken, Pennsylvania, the company supports customers to gain production efficiency, improve product quality and lower ongoing costs through bespoke solutions.