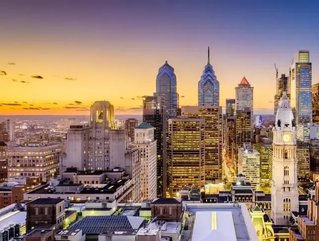 Business Chief explores Philadelphia, a city famed for its historic role in the American revolution, its art and its culture. ‘The City of Brotherly Love’ is also a major hub of industry and commerce.

The sixth-largest city in the United States, Philadelphia is the capital of the State of Pennsylvania and steeped in the history of the American Revolution. Founded in 1682 by an English Quaker, Philadelphia played host to the signing of the Declaration of Independence in 1776 by the country’s founding fathers and is the home of many American firsts. The so-called ‘City of Brotherly Love’ is home to the United States’ first library, medical school, hospital, stock exchange and business school.  By the 19th century, the city had become a major hub of industry and the nation’s railroads.

Today, the city remains a center for commerce in the state, with its collective gross metropolitan product (GMP) being estimated at $490bn in 2018. While industries like communications and tourism continue to play leading roles in the Philadelphia economy – an estimated 42mn domestic tourists visited in 2016, contributing approximately $11bn to the economy of the city and surrounding area – the area is also emerging as a national hub for biotech investment. According to the Philadelphia Business Journal, as of September 2018, the city had seen almost $775mn in venture capital investment in the previous 18 months. Currently, Philadelphia biotech firm Spark Therapeutics is undergoing a $4.3bn merger with Swiss company Roche, which is expected to be completed in 2020.

In addition to its tourism and biotech scenes, Philadelphia’s surrounding area is home to 15 companies on the 2019 Fortune 500 list. Of those companies, two of them have their homes in the city proper: telecommunications colossus Comcast, and food industry services provider Aramark. Business Chief takes a look at the two biggest companies from the home of the Liberty Bell, the Eagles and Benjamin Franklin.

Headquartered in the heart of downtown Philadelphia, Aramark Corporation has operated as a food service, facilities, and uniform services provider to the education, healthcare, business, corrections and leisure industries since its original founding in 1936. The Company employs more than 227,000 people worldwide and has been a part of the Fortune 500 list for 25 years.

Committed to not only supporting its Philadelphia workforce, but all of its workers across the US, Aramark announced in July 2019 that going forward, it will provide the opportunity for eligible hourly employees to receive full tuition coverage for college degrees. The new program has been designed specifically to help industry-leading companies to connect and build relationships with universities.

The Aramark Frontline Education Program is part of a $90 million investment the company made in its employees earlier this year that also includes targeted wage and benefit increases, as well as additional training and development, according to the company.

“Our mission to Enrich and Nourish Lives means we have a responsibility to help our employees achieve their full potential and lead fulfilling lives,” said Eric J. Foss, Aramark’s Chairman, President and CEO. “Education is key to making that happen and we are proud to provide this learning pathway to our dedicated frontline team members who want to advance their education and grow their careers.”

The application process for Aramark employees will begin in October, with the first batch of students scheduled to start in Spring 2020.

Telecommunications conglomerate Comcast is one of the largest owners and operators of broadcasting and television assets in the world, the largest provider of internet services in the US and a leading home telephone service provider. The company is based in the City Center West area of Philadelphia and operates out of its own dedicated campus. Its three primary business units are Comcast Cable, NBCUniversal and Sky.

According to Fortune, Comcast completed its $39bn bid for British broadcaster Sky in October, meaning it now owns 75% of the European pay-TV giant, dramatically expanding the firm’s global footprint.

This expansion and diversification is a key strategic goal for Comcast, as cable subscriptions across the US continue to decline, replaced by streaming services like Netflix, Hule and Amazon Prime. While its NBCUniversal division is slated to launch its own streaming service in 2020, the media giant is also taking steps to explore new innovative revenue options in its home town of Philadelphia.

This year marks the start of the second round of the Comcast NBCUniversal LIFT Labs program. “Spanning the entire fourth floor of the new Comcast Technology Center, LIFT Labs PHL is a unique place where startups can elevate their companies with support from mentors, experts, seasoned entrepreneurs — and one another,” writes the company.

This year, Comcast has selected 11 startups from around the world to participate in the incubator program. The companies, which range in scope from artificial intelligence (AI) to fitness apps, will spend the year participating in custom workshops, training sessions, and business meetings unique to the company and its LIFT Labs program throughout the course of the accelerator. Comcast is also promoting diversity in its selection of companies, with one third of the startups having a female founder.

“We are incredibly excited by the passion, drive, and foresight of the founders of these companies,” said Sam Schwartz, Chief Business Development Officer, Comcast, in a press release. “The program will provide them with support and access to Comcast NBCUniversal leadership, and help them push their boundaries in new ways to produce more competitive and successful businesses. At the same time, we will learn from some of the best new entrepreneurs in technology.”