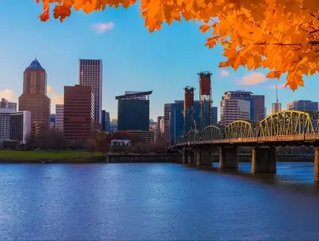 Located in Oregon at the confluence of the Columbia River and Willamette River, Portland is the state's largest city. Portland is also the second most populous city in the Pacific Northwest. The approximately 640,000 people that make Portland their home are a portion of the more than 2.4mn individuals residing in the city's metropolitan area. This makes it the 25th largest such area in the entire country.

Due to its favorable location, Portland easily lends itself to numerous industries. Energy costs are fairly low, the city boasts large and modern marine terminals and it is also a hub for international air carriers. Portland also has the reputation of being a "weird" city. While pundits like to point out the absurdities that sometimes come from the city – the chummy local government and its fixation on artisanal coffee, for example – these same kinds of attributes can also lend themselves to unique businesses that might flounder in other environments. Here, they are often embraced by the niche markets they serve and are able to expand to meet the increased demand for their distinctive products and services.

The Port of Portland

The Port of Portland is the country's third-largest export tonnage port as well as the largest situated in fresh water. The marine terminals of Portland handle more than 13mn tons of cargo every year and is also the location of one of the United States' largest ports based on export tonnage. While the steel industry became Portland's top producer in the 1950s – and still accounts for multi-billion ton shipments of metal to destinations overseas – it is currently better known as the country's largest shipper of wheat.

As the above statistics demonstrate, Portland is a study in contrasts. According to a recent Biz2Credit study, the Portland metropolitan area was noted as having the nation's second-highest revenue on average in terms of businesses with average revenue below $10mn or with fewer than 250 employees. Portland has also been recognized as one of the last cities that hasn't devolved into skyrocketing rents and other rising costs. For example, the median rent in the city sits at around $969 per month. This figure is about half of what a renter can expect to pay in San Francisco.

Diversity in Portland’s educational offerings adds to the development of innovative start-ups and the growth of others. In addition to Portland State University – the university with the state's second-highest enrolment – other notable institutions of higher learning include the Oregon Health & Science University, Pacific Northwest College of Art, Lewis & Clark Law School and the National University of Natural Medicine.

Portland businesses find themselves sprinkled throughout any list that highlights fast-growing, emerging or innovative companies. Technology is an important component of Portland's economy, so much so that the city has earned the nickname of "Silicon Forest." This moniker is a nod to the rich number of trees that dot Portland as well as its similarity to the Silicon Valley area of Northern California. In addition to the more than 1,200 companies devoted solely to technology, the city is home to numerous resources and support networks. These include business incubators, as well as facilities for online startup companies and software businesses.

Perhaps not surprisingly, Intel is the largest employer in the Portland metropolitan area. Famous for its computer chips and other components that meet the growing demand for speedy technological functions, Intel boasts more than 15,000 area residents on its payroll. The company maintains several campuses in Hillsboro, a city located just west of the central area of Portland.

Portland is also home to numerous major, active-oriented brands including the following:

Nike is the iconic maker of athletic shoes worn by celebrities, sports stars and ordinary citizens around the world. With products to meet the needs of every type of athlete – even those who are couch potatoes – Nike fosters a culture that rewards innovation, creativity and invention.

Adidas manufactures sports clothing and shoes for the general athlete as well as for ordinary people who like to be comfortable and stylish. The sports brand also develops products that meet the specific needs of players of tennis, football, basketball and more.

Columbia Sportswear is the undisputed leader in outdoor apparel and related products. Combining their passion for the outdoors with an understanding of the people who enjoy it means that Columbia Sportwear's boots, pants, jackets, fleece and shoes boast the latest in innovative technology.