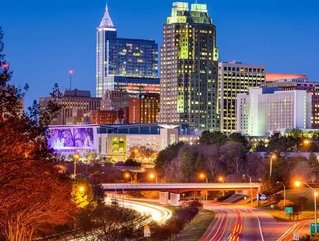 Home to one of the US’s leading tech research and development sites, Raleigh is a lesser known engine of American technological and cultural power

Named after Sir Walter Raleigh, who is widely believed to have introduced Europe to the humble potato, Raleigh is the capital of North Carolina and the state’s second-largest city after Charlotte. The city has a population of over 1.3 million people, is ranked by Forbes as the third best place in the country for business and careers behind Seattle, WA and Dallas, TX, and boasts a college attainment score of 46.2%.

While its bigger sister boasts the arguable ignominy of hosting the Charlotte Hornets, Raleigh’s most popular in-house sports team is the NHL’s Carolina Hurricanes, two-time winners of the Conference championships and winner of the Stanley Cup in the 2005-06 season. The city also holds six colleges and universities, including North Carolina State which ranked 279th in the 2019 World University Rankings. Ivy League member and world-leading university, Duke, is also found in Raleigh’s close neighbour, Durham.

“Raleigh is ranked by Forbes as the third best place in the country for business and careers behind Seattle, WA and Dallas, TX”

Along with Durham and Chapel Hill, home of the University of North Carolina at Chapel Hill, Raleigh is an anchor city of the Research Triangle Park (RTP), the largest research park in the country. As such, Raleigh is part of one of the most significant tech research and development regions of the US, housing over 300 companies who employ at least 55,000 staff and 10,000 contractors between them. To name just a few, firms to have established an office at the park include: Wells Fargo, the Army Research Office (ARO), GlaxoSmithKline, Credit Suisse, Bank of America, Biogen, Lenovo, Cisco, Dell EMC, Diamanti, IBM, eni, and Concord Technologies. Signifying the importance of the park to the US’s wider research and development scene, GlaxoSmithKline’s office is its commercial HQ in the US, while Cisco’s office at RTP is its largest outside Silicon Valley.

ARO’s presence is similarly reflective of the importance of the area, as the primary extramural basic research agency of the world’s most well-funded military force. With a highly competitive selection and funding process for pitches brought forward by private enterprise, educational institutions and nonprofits, ARO is a key component of the US military’s technological and scientific supremacy in combat and is considered vital to the continuing military leadership of the US on the world stage. Biotechnology leader Biogen, with revenues in 2017 exceeding US$12bn, conducts a significant portion of its medical technology research at RTP. Primarily focused on unearthing new treatments, therapies and even cures for neurological diseases such as Alzheimer’s, ALS, spinal muscular atrophy, and Parkinson’s, Biogen’s pioneering work stands to improve the lives of those suffering such conditions whilst offering hope that future generations will be spared them. Elsewhere, IBM has held an office campus at RTP since 1965 where the pre-eminent IT giant situates in-house tech development along with a host of its subsidiaries.

Raleigh has no shortage of cultural sites, leading museums, sports venues and recreational activities for natives and tourists alike. Chief, perhaps, among its historical locales is the North Carolina State Capitol, a Greek Revival-style building constructed in 1840, the grandeur of which extends beyond its architecture to the array of statues, plaques and busts of North Carolina’s most important historical figures. While the Capitol building is free to attend, those who book in advance can also see the home of the Governor, the North Carolina Executive Mansion, which was built in 1891 entirely from materials sourced in NC. Elsewhere, for the historically invested, the North Carolina Museum of History is one of Raleigh’s most popular tourist spots and features an extensive exhibit detailing the state’s history from ancient times through to the 20th Century. Further to that, the North Carolina Museum of Natural Sciences offers an awe-inspiring visit for those with even a cursory interest in the natural world, showcasing the intricacies of NC’s environment, geography, flora and fauna with free entry.

On a more recreational basis, no modern American city is complete without a thriving craft beer scene, and Raleigh is replete with over 25 local breweries and, for more committed enthusiasts, its own beer trail. Pullen Park, the state’s oldest public park, offers plenty of space and natural beauty for those needing a break from the buzz of the city as large, with the Pullen Aquatic Centre, Pullen Arts Centre, and the Theatre in the Park all found within its boundaries.

Known to combine the qualities of a traditional Southern city with the technology and infrastructure of its larger, glossier American contemporaries, Raleigh’s position as a research hub and historical centre is augmented with the infectious Southern charm of its denizens. Getting amongst the locals is sure to offer the most authentic experience for those exploring this rustic yet progressive example of fine urban living.