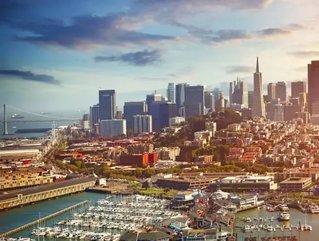 A popular travel destination for both business and tourism, San Francisco is home to an eclectic cultural mix which reflects its diverse economy

Known as ‘Golden Gate City’, San Francisco’s stunning landscapes, robust infrastructure and exceptional living standards make it one of the fastest-growing cities in America. Underpinned by a global epicentre of technological advancement, talent remains high, with many opportunities available for those who wish to grab them across the Bay Area and the city of San Francisco.

Second only in the US to New York City, the population of San Francisco is set to surpass 960,000 by 2035, leading to a number of challenges in housing, employment and infrastructure. In 2017, the number of visitors to the city reached 25.5mn, amassing $9.10bn in total spending. This year, the city has forecast a total of 26.3mn visitors, with spending projected to reach $9.46bn.

Leading on from the dot.com bubble, the emergence of social media and consumer technologies, the Bay Area has become a dominant force within business innovation and financial advancement. Silicon Valley, situated in Santa Clara County, has attracted some of the most respected names in technology, with 29 Fortune 500 companies locating their headquarters in the city, such as Google and Apple. In 2016, the city gained a GDP of $781bn, leading the region to remain a global digital hub. The tech giants are two of the most valuable companies in the world, inspiring entrepreneurs to achieve the same level of success.

The number of technology-focused positions continues to rise, with product development engineer and product management roles providing an average salary of $173,570 and $173,556 respectively, according to Indeed. Data analytics, cloud technology, software development, DevOps and machine learning are also particular areas of focus for technology companies across the city.

Fully inspiring a raft of start-up ventures, the Bay Area’s global position has led the city of San Francisco’s educational facilities to also up their game, transforming it into one of the most prestigious areas of learning in the US, with 50% of residents obtaining a degree. Supported by its strong economic growth, the city is renowned for providing some of highest incomes in the US within the technology, finance and healthcare sectors, as San Francisco continues to drive increased tourism.

With a longstanding reputation in the world of finance, made clear by the number of banks, real estate firms and law corporations situated within the city’s iconic Financial District, an established tax exemption for biotechnology companies has now also led to a significant boom in healthcare roles in San Francisco and the Bay Area. While the University of California has focused its efforts on promoting biomedical innovation at the 20 facilities under its umbrella, it is also the parent organisation of the University of California San Francisco Center. San Francisco State University also houses over 30,000 students with over 500 courses on offer.

Taking full advantage of its rich multicultural history and artistic flair, San Francisco has also catered to those who wish to study and work within art, design, film or music, as well as baking and hospitality, in order to provide for its infamous bustling restaurant and entertainment scene.

For tourists, popular sites such as Fisherman’s Wharf and the Chinatown District celebrate San Francisco’s varied heritage, where the number of jobs in the tourism industry exceeded 80,000 in 2017, delivering over $714mn in taxes and fees. Overseas spending represented over 86% of total visitor spending in the same year, with China leading the way at $1.59bn. India, the UK, South Korea and Taiwan followed close behind.

With a growing surge of white collar workers and tech enthusiasts, those in lower-paid roles have been priced out of the housing market, with the average income in the city reaching $118,400. In the first half of 2018, San Francisco's median house price rose by $205,000, smashing records. The average price for a home in the city now exceeds $1.62mn.

To support its subsequent growth and appeal to residents and visitors, the city continues to bolster its ability to remain a top destination, placing heavy investment within its transportation links. Those in the Bay Area can take advantage of the Bay Area Rapid Transit (BART) system, linking with smaller urban areas and counties nearby. Additionally, the Caltrain commuter line connects San Francisco Peninsula and Santa Clara County.

Thirdly, the city remains one of the last places to maintain its historic cable car system, the San Francisco Municipal Railway, a significant tourist attraction. Affectionately known as Muni, the system has been modernized to propel users to their destination, to the delight of tourists and residents alike.

For those who regularly fly in and out of San Francisco, the city focuses heavily on delivering exceptional customer service. Home to the largest international terminal in North America, San Francisco International Airport has been consistently named as one of the best airports on the continent, generating close to 43,000 direct jobs and $8.4bn in business activities. The facility also plays a key role in international trade, having facilitated close to $54.6bn of imports and exports in 2016.

Not content in delivering world-class infrastructure and world-class employment opportunities, San Francisco ensures all new developments are built with sustainability in mind. The first US city to provide a park within a 10-minute radius for each resident irrespective of their location, the city is home to a number of green spaces, parks and beaches which are easily accessible; subsequently, it has been ranked one of the ‘most walkable cities’ in the US.

Cycle-sharing and carpooling have become increasingly popular in order to reduce costs, congestion and pollution levels, leading the city to be the home of several startup ventures and renewable energy initiatives, powering local businesses and homes with solar energy.

Technology will continue to drive San Francisco’s ongoing rise, keeping it as a top destination for thrill seekers and corporate travellers throughout the years to come.