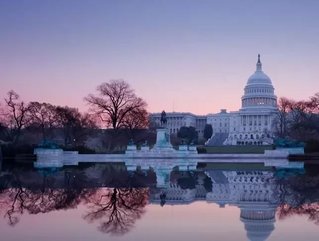 Bordered by the states of Maryland and Virginia, Washington DC is the home of the US federal government and some of the country’s most iconic architecture. For a place so emblematic of the United States’ history, traditions and political institutions - its landscape is dominated by white marble monuments in the neoclassical style - the past few years have seen ‘the American Rome’ become what Time magazine describes as “a female-friendly counterpoint to the bro culture of Silicon Valley.”

According to Fortune, in 2017, all-female startups received a mere 2.2% of the total venture capital funding in the United States. By contrast, all-male teams received 79% of the pot.

However, in the same year, Forbes Magazine found that women in the Washington DC tech scene made 94.8% of what their male counterparts were paid, compared to the national average of 84.8%. Women were also found to hold 41% of the tech jobs in the city - far ahead of the national average of 26%. SmartAsset ranked Washington DC as the top city for women in tech for the fourth year running last year.

This trend is also set to continue, as the 2018 midterm elections resulted in the highest proportion of female congressional representatives in history, with 42 women winning their first seat in in the November midterm elections. According to the New York Times, “the congressional freshman class of 2019 is perhaps best described in superlatives. It is the most racially diverse and most female group of representatives ever elected to the House, whose history spans more than 200 years.” The 2019 Congress will include “at least 105 Democratic women and 19 Republican women.”

As such, Washington DC appears to be one of the best cities in the nation for powerful, enterprising women. In November, serial entrepreneur and veteran of seven startups in the Washington DC area, Tiffany Norwood, said in an interview with the Free Times, “to be around where you have … women or people of color popping up and saying, ‘We are in support of the startup economy, we want to be entrepreneurs, too. We want to collaborate and be supportive,’ that is so exciting to me.”

Amelia Friedman, co-founder of Hatch, a startup that allows people and businesses to create their own b2b or b2c applications without coding, told Time Magazine in February 2018 that “I think what we’ve done, it’s only possible in DC. Here, women-run companies can grow big.”

One women-led DC startup disrupting the fintech sector is Sou Sou. Taking its name from a Caribbean and West African financing tradition called a sousou - where people regularly pay into a fund, withdrawing money when needed - the Washington-based startup was founded in 2015 by ex-US State Department program manager, Fonta Gilliam. Her startup leverages community to build a funding source, according to a report by the Washington Business Journal.

Gillian says that traditional banking services “overlook the thousands of prospective loan applicants because they do not fit into traditional credit risk profiles. This has created a deep divide between banks, women, minorities and low-income communities.”

This is where Sou Sou comes in. It’s a “crowd-banking platform built to give people struggling financially or with no credit (think recent college grad) an option other than a bank, investor or predatory lender”, Gilliam explains. “A user visits the Sou Sou website and selects a fund based on personal financial goals. The site charges members a monthly membership fee automatically deducted from their accounts. Those fees are used to capitalize the community loan fund, and an algorithm determines when it’s a user’s turn to request a low-interest loan from that fund, so long as they’re up to date with their contributions.”

After becoming fluent in Italian while studying abroad, Entrada ELS founder and CEO Erin Janklow “learned firsthand that taking up a second language as an adult is challenging, but it's not impossible”, Inc reported earlier in 2018.

Her startup, which was featured in July 2018 by startup capital investor Rent the Runway, helps immigrant employees in the hospitality sector become proficient English speakers while at work. The method uses a device and Talkback method of teaching, according to Technically DC. With 30-minutes lessons per day, Entrada ESL claims it can deliver confident English speakers “in just 100 days”.

Veda Data Solutions, led by ex-Washington fundraising specialist Meghan Gaffney Buck, is disrupting the way that healthcare consumers connect with their medical specialists. According to a report by Technically DC, Veda’s service works to ensure the accuracy of medical provider directories. “If you went online right now and were looking for a new primary care provider, and did a search, about half of the data points that search provided back to you would be inaccurate,” Buck said in September 2017.

Since “Medicare decided that it was such a big barrier to care that they would fine insurers for inaccuracies,” Buck’s team is hoping to help insurers avoid fines by introducing machine learning tools designed to correct faults in databases.

Last year, Veda secured a win at the Vinetta Project Venture Challenge - a startup competition that highlights entrepreneurial women - and a $1mn seed round, Technically DC writes that “the company looks poised for growth.”