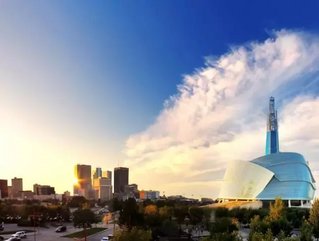 Located at the intersection of the Red and Assiniboine rivers, Winnipeg is the capital of the province of Manitoba. Historically a center of indigenous trade dating back long before European settlement, Winnipeg officially achieved cityhood in 1873 and today is home to over 705,000 people. Nicknamed “The Gateway to the West”, the city is a transportation hub with strong rail links served by Via Rail at Union Station for passenger rail. Freight Rail, meanwhile, is handled by the Canadian National Railway, Canadian Pacific Railway, Burlington Northern Santa Fe Manitoba and the Central Manitoba Railway.It is the only major city between Vancouver and Thunder Bay with train links directly to the United States, according to Destination Winnipeg.

Another element of Winnipeg’s role as a transportation hotspot is its air transport hub, the James Armstrong Richardson International Airport. Located on the Western outskirts of the city, Winnipeg International is Canada’s seventh-busiest airport by number of passengers, serving over 4.3mn people in 2017. In 2018, this figure rose again to 4.5mn in 2018, continuing a period of steady growth for the airport, according to a report by Global News Canada.

“The increase in traffic this summer is directly connected to the growing interest in our city and province. Winnipeg and Manitoba are where people want to be, and we are seeing more and more traffic as a result,” said Barry Rempel, President and CEO of Winnipeg Airports Authority. “WAA continues to work with our airline partners to improve service and add more destinations to connect our region to the world.” On average, Winnipeg International serves 11,000 passengers each day, and that figure is only expected to increase.

Additionally, Winnipeg International is the number one airport in Canada for dedicated freighter flights, keeping goods flowing efficiently and building on the city’s reputation as a transportation and logistics hub. All told, the Winnipeg Richardson International Airport has a CA$3.4bn economic benefit and supports over 17,000 jobs in and around the city.

Winnipeg International is not content to become one of the country’s biggest air hubs; it is also determined to be one of Canada’s smartest. Winnipeg International is one of a small group of Canadian airports to incorporate biometrics-enabled primary inspection kiosks into its border control process. According to a report by Biometric Update, Winnipeg, alongside select pilot programs in Toronto, Quebec and Hamilton, has implemented self-service, fingerprint-enabled kiosks for use by biometrically enrolled foreign nationals and permanent residents.

Biometric-enabled kiosks that automate the border clearance process are scheduled to be phased-in at all major Canadian airports throughout 2019. Its position as a leading player in the initiative should help Winnipeg International process its growing passenger base at an even greater speed.

In addition to being among the first adopters of self-service biometrics, in March 2019 Winnipeg International became North America’s very first airport to pilot an autonomous snow plow. Winnipeg experiences an average of 53 days of snow each year. Starting in Spring 2019, Winnipeg International will have its snow removal needs met by Otto, a specially designed ATI Snow Mauler configured to operate autonomously using Northstar Robotics technology.

"Launching North America's first autonomous snow plow is a great achievement for Winnipeg Richardson International Airport," said Rempel. "Our success is a direct result of bringing together partners who are committed to leading transportation innovation and growth."

Local Manitoba companies Northstar Robotics Inc and Airport Technologies Inc collaborated on the autonomous vehicle’s construction. The plow can perform snow clearing tasks by following predetermined routes and controlling the plow blade at specific locations, according to a press release by the Winnipeg Airports Authority.

"Autonomous technology is changing how we work," said Shawn Schaerer, President and Founder of Northstar Robotics. "It is exciting to partner with companies that are ready to adapt and pioneer this cutting-edge technology." ATI's President, Brendon Smith agreed, adding that "ATI is proud to be part of the team breaking new ground in snow clearing technology. We are excited to continue to find new ways to incorporate autonomous technology into our equipment."

Otto is equipped with 3D LIDAR and RADAR that can sense its surroundings and detect obstacles.  The plow is also equipped with a fault tolerant wireless emergency stop system, a further safety enhancement. Research and development will continue, focusing on allowing Otto to operate in more complex areas of the airport.

In addition to equipment, Winnipeg International is expanding its infrastructural capabilities in order to better support its industry-leading freight proficiencies. In June 2018, the Winnipeg Airports Authority broke ground on a 96,000 square foot Ground Services Equipment (GSE) Building. At the unveiling, Rempel said of the $27mn building: “The world is more and more connected every day, and for Winnipeg to fulfil its potential on the global stage we must have the infrastructure in place to compete. Today’s investment is another step in realizing the vision of Winnipeg as an airport city.”

The multi-use building will give ground handling, commissary and cargo companies operating space close to the terminal. Once completed, current tenants in the airport’s cargo campus will relocate to the new GSE Building, freeing up much-needed space in the cargo area for redevelopment. Winnipeg International is a constantly evolving and expanding entity, both an expression of and a driving force behind the rising star of Canada’s Gateway to the West.