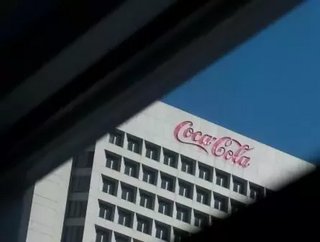 Figures for the opening quarter of 2017 did not make easy-reading for Coca Cola’s shareholders but the new man who takes charge on Monday says it is all part of a bigger plan for the business.

The company’s current Chief Operating Officer will become CEO next week and he takes over at a time when the company is undergoing its biggest corporate restructure in over a generation.

Coca-Cola's total sales fell 11.3 percent at the start of this year, marking its eighth- consecutive quarterly decline in revenue, profits dipped by 20% mainly due to a massive operation restructure which has seen in refranchising its bottling operations on a mass scale.

Talking to CNBC about the quarterly figures, Quincey, said: “There’s been lots of noise, as we sell off these bottling businesses obviously it makes the revenue number, particularly, very, very noisy.

“I think the simplest way to read through that is to look at the underlying unique sales and the price mix we are achieving, a solid 3% for the core, in line with our full-year guidance.

“Reality is, we want to accelerate that into the coming years and it’ll start to get cleaner into ‘18 and ‘19.

“This year, given all the other refranchisings we’ve yet to complete, will continue messy but it’ll get cleaner into ‘18 and ‘19 and you’ll start to see the robust growth coming through for the new future, smaller company.”

Coca Cola had warned shareholders earlier this year that profits would drop as the company works to refranchise its bottling operations and shrink its workforce. The expects its new structure to be in place by the end of the calendar year and Quincey, who moves into his new role on Monday, thinks the new operational model will give the company some more much-needed flexibility.

He added: “We’re doing these changes in the corporate centre, basically to make us more agile and more focused on the growth.

“By next year we’ll have finished the refranchising so we will be a much smaller company and we’ll have gone from a high of 150,000 employees, we’ll have transferred a lot of those operating employees to our bottling partners and we’ll be under 40,000.

“So between that change in the size of the enterprise, what’s happening with technology and a sharper focus on ‘what do we need to do to drive growth into the future?’ – and yes, it’s painful, we’re going to impact some people in the corporate centre but we think this new, slimmer, leaner, focused corporate centre reflects the new reality of the company and sets us better up for growth going forward.”