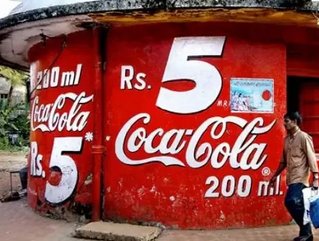 Coca-Cola may be the world’s biggest soft drink company, but the beverage maker has been trailing its rival Pepsi in one of the world’s fastest-growing markets. That’s why Coca-Cola has announced that it is stepping up its investment in India by $3 billion over the next eight years.

The Atlanta-based company has seen more success overseas than on the home front recently—at the end of the first fiscal quarter, Coca-Cola’s volume in India had grown 20 percent, compared with two percent in North America.

By investing in new plants and sales networks, Coca-Cola aims to further boost worldwide sales and double revenue over this decade.

Coca-Cola has invested $2 billion in India over the past 19 years and hopes that an additional $3 billion will help it meet rising demand among India’s large population of teenagers, increasing urbanization and expanding economy. While 12 Coca-Cola products are consumed per person in India annually, the company averages 38 products per person in China, 40 in Kenya and 92 globally.

“We have increased the investment here because we think there’s potential here to stay ahead of the curve,” said Coca-Cola Chairman and CEO Muhtar Kent. “India is a wonderfully diverse country—dynamic, young and emergent.”

Since it first began selling its products in the country in 1952, Coca-Cola’s road in India hasn’t been conflict-free. In 1977, the company exited the market when new Indian government regulations required it to hand over control to a local partner and reveal its secret formula. It didn’t re-enter the country until 1993.