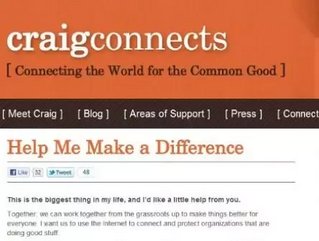 Craig Newmark, the creator of the ever-famous and ever-provocative Craigslist is making news with his non-profit project, craigconnects. Newmark has decided to create a competition that will allow four non-profit organizations that work with U.S. veterans and military families to compete against each other for one month. The organizations are fighting for a portion of a $100,000 grant in craigconnects’ first initiative since launching merely three months ago. The prize money will be distributed proportionally between the four competing organizations, based on the number of donors.

Blue Star Families, The Bob Woodruff Foundation, the Intrepid Museum Foundation, and Iraq and Afghanistan Veterans of America were chosen to participate in the project.

The craigconnects competition is actually based on the number of donors and not based on the total dollar amount donated to each non-profit. Newmark believes that this model of community-based donations engages a group of people fighting for the same cause, rather than just raising a certain amount of money.

“I feel that the only way to get big issues addressed is by finding ways to get lots of people at the grassroots level to work together, to find ways for the powerless, the voiceless to get serious influence,” Newmark said in an interview with Mashable.

The Craigslist founder started his philanthropy as a way to distribute his wealth and create awareness and action for issues that he’s most passionate, while leveraging his website. Craigconnects plans to use Facebook, Twitter and YouTube to help the four organizations strengthen their online communities.