Is democracy in the workplace a future business trend? 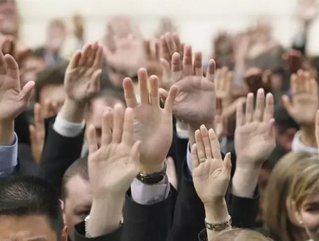 While America is one of the leading democracies in the world, this voting-based decision-making method does not translate into the world of work. The important decisions of companies are made by a tiny percentage of top executives behind closed doors on the premise that “they know best.” Considering that the United States is the richest nation the world has ever seen, one could argue that a top-down decision-making process in business works. Is it time to consider a decision-making process that includes everyone associated with the company, a democracy in the workplace, for the 21st century? According to the real estate business website Inman, it’s working well for some European corporations that are taking the leap and trying it.

According to Inman, this February 23, Haufe, a corporation based in Freiburg, Germany, “put up all the top executive posts for democratic selection by their employees in an anonymous vote.” Haufe is not some seat-of-the-pants, fly-by-night operation. Instead, it has over a thousand employees and revenues measured in the hundreds of millions of Euros.

While explaining why he risked his job, Haufe CEO Marc Stoffel discussed how employees invest significant amount of time into a company simply by the act of showing up to work. As result of this time investment, employees know a lot that is not integrated into the decision-making process performed by management. This arrangement has the effect of sharply reducing a sense of responsibility for the business by the employee. Putting important decisions—especially the hard ones that single CEOs take all the flak for—up to a company-wide vote changes this dynamic. “Demands that are embraced by the entire company, rather than inflicted by management, are more likely to be actively treated as challenges rather than as burdens,” writes Inman.

Archilogic, a Swiss Internet startup that specializes in intelligently generated 3-D interior models, runs their business the same way. They argue that direct democracy in the workplace can do away with some of the burdensome bureaucracy that can slow a business down.

“Decisions have to be made by consensus. This process extends throughout the company — the agenda for meetings is set collectively, and the newest employee is not just allowed to raise their voice at meetings, but they are expected to. The level of trust that the company has in its employees allows it to dispense with a lot of the apparatus of management — even fixed office hours are avoided.”

The majority of European businesses are still run by a handful of elite workers, just like in America. If in the long run the pros outweigh the cons, is the decision-making model employed by Haufe and Archilogic the wave of the future in Europe and the United States?