Doug Smith: a CEO under 40 and just getting started 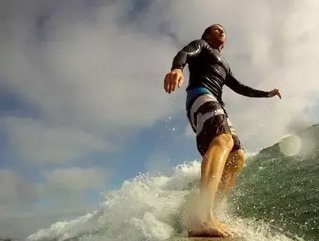 Arriving at the True Nutrition offices and manufacturing facility, you can instantly tell that the vibe in the office is a reflection of the laid back Southern California CEO at the helm of this nutritional supplement empire. Toting a ponytail and Chuck Taylors, Doug Smith is anything but the average CEO. Perhaps it’s his young age, his zest for life, or the fact he’s a yogi. One thing is for certain: the man knows how to have fun while getting down to business.

His office is a testament to his lifestyle with a custom built wooden desk that is the shape of California and an exercise ball instead of a chair. Smith’s healthy lifestyle is incorporated into everything he does. On the walls are photographs of Smith scaling mountain peaks and, “generally being awesome,” as he puts it.

Don’t let this laidback lifestyle fool you. Smith is fiercely dedicated to uncompromising quality, priding himself on delivering superior products like fair trade cocoa at a manageable price. “We don’t want anyone dying for our chocolate,” he says, “and would rather pay more for it than sacrifice someone’s life.”

True Nutrition is a multi-million dollar health and wellness company that was built out of Smith’s home with only $5,000 in borrowed capital and an intense drive to be successful. “We started with a pallet of protein powder and spun it from there a decade ago,” says Smith. The then young man in his twenties quit his day job on a whim, deciding that he no longer wanted to work for someone else. His entrepreneurial spirit, paired with his refreshingly positive outlook on life, is the driving force behind everything he does.

When asked what his motivation was behind starting the company, Smith explains: “It’s essentially two reasons. The first one being, I graduated school and didn’t want to work for someone else so the only alternative was, I move back with mom and she makes me grilled cheese sandwiches, or I have to do my own thing. I kicked around a few ideas, and I had this idea of allowing people to customize their own protein powder. We blend it and ship it to them. It was really simple.”

Smith doesn’t just own True Nutrition; he also has his hands in several other opportunities including a wine bar and B-grade horror films. Learning more about this business mogul made us want to sit down, have some wine and get to the root of who Doug Smith really is, what makes him so successful and what advice he has for aspiring entrepreneurs.

BRUSA: Doug. You are 36 years old. You own a multimillion-dollar company. You own this amazing wine bar. What else are you doing right now?

Smith: I am really focused on all the business things I have going on, but I’m super motivated on giving back. Not getting too specific, I’m working with a few companies right now and bouncing some ideas off of non-profits to see if we can expand into markets of helping people. That’s my focus right now.

BRUSA: So you have a heart for philanthropy?

Smith: Yeah. I realized over time when you help other people it really comes back. Call it karma. Call it paying it forward. It works.

BRUSA: How would you describe the perfect entrepreneur or what would you tell someone in your generation about being an entrepreneur? I kind of sense from you it’s not about what you’re doing, it’s about your heart behind it.

Smith: If you’re doing it for money you’re not an entrepreneur. If you’re being creative because you feel something can come from it, hopefully something good that’s not going to hurt people, then you’re an entrepreneur. That means you could be an entrepreneur and not make a dime. If you love to do something and you’re successful at it you are in the truest form an entrepreneur. We’ve mixed those words as in, it’s based on economics. Most cases when you get involved in it, it turns into economic means because our society is based on capitalism. I always think if you start with your heart first and you believe in it and it makes sense to you everything else comes from it: economics, money, success. But if you always truly believe in it, it works.

BRUSA: So where is your heart right now?

Smith: I’m always in this mode that life truly is, “do what you need to do to make yourself happy,” and then everything else cascades from that. Health and dietary supplements can help you feel better and if you feel better than life kind of becomes better from it.

BRUSA: What advice would you have for someone who has great ideas and wants to make something happen?

Smith: I think if you follow the one you can truly put yourself behind, feel proud about and can sleep at night doing it, that’s the one you do. I talk about mental purgatory; to say you have ideas but don’t act on them is worse than not having ideas. You have to act on it, and I always tell people they can go either direction but being right in the middle is the wrong direction. It doesn’t matter if you say yes or no to something, you at least made a decision. It’s not the point of picking and choosing, it’s making the decision. It doesn’t really matter if you say yes or no to something, life will make it happen and make it a success if your attitude is good. Make the decision, don’t’ waver and don’t be in mental purgatory. That’s the key to success: Make the decision.

BRUSA: You live a healthy lifestyle and you are a yogi, tell me about how that has helped you and your business.

Smith: As soon as I realized that being a yogi or yogic has nothing to do with postures and nothing to do with what you do with your body, but how you think and process. It’s more or less to understand that everything we kind of reflect on or effects us really doesn’t matter too much and the things that do matter we don’t put enough time, effort and thought into. And also just being here today and not what happened yesterday and not planning what needs to happen tomorrow. They are all important but we really forget right now. For me, that little part of my life has really helped me on a grand scale.

Smith: What I really want to say, from a health perspective, it’s not about food and supplements or what you are putting in your mouth, it starts with a good attitude. I hate to sound like a hippy, but we need to treat people better. It seems like with all this technology it appears we are heading down a market of separating ourselves.

BRUSA: Do you think that’s what made you so successful? The way you treat people?

Smith: 100%. I am zero without everyone else around me. That means everyone around me, they are not employees, they’re my friends and some are borderline family members. I think if you delve in deep and look at yourself and figure out what is important to you and follow that, success comes. I was told I was learning disabled and told I had to fit in a box. Because I was put in a box I didn’t have all of these other opportunities. And all of these other opportunities that society looks at a positive, really aren’t that positive. For me, I didn’t have a choice. I had to be an entrepreneur because I couldn’t fit in those other boxes. In a way if you don’t listen to what other people say, resistance to the status quo – you can really do anything. Business is super simple, it’s almost ridiculously simple. People make it more complicated when you don’t need to. Understand it’s easier than you think it is. If you have an idea don’t put yourself in a box and find reasons why it won’t work. Look at the other side and think about why it will work. You’re always going to face adversity and problems will come up but they are always solvable and I don’t care what it is they can always be fixed. So, if you think you have a thought and want to do something, don’t question it. Just do it. The worst thing that can happen is that it doesn’t work, but at least you know it doesn’t work and that’s the key.