Eric Lamaze is More than Just an Olympian 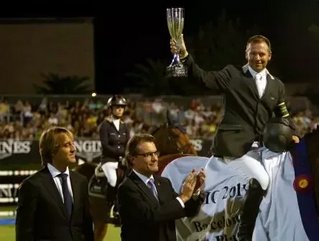 Lamaze was treated to the tutelage of famed coach Diane Dubuc who effectively shaped his talent for riding at a young age, and has said that show jumping helped him turn his life around and battle the resounding effects of a rough childhood.

Poised to take part in the London 2012 games, the development is a positive direction for Lamaze, after being devastated by the death of his prized stallion, Hickstead. The famed horse shared in his win of a gold and silver medal at the 2008 Olympics in Beijing.

A silver medal was awarded to Lamaze for his strong contribution to a team event and first prize as a result of a “jump off” between Swedish rider Rolf-Goran Bengtsson earned Lamaze the coveted gold in the individual show jumping event. Sadly and to Lamaze’s great heartache, Hickstead succumbed to a heart attack last November during a World Cup qualifier in Verona, Italy.

At 44 years of age, Lamaze has the perk of participating in an Olympic event where athletes are not doomed to peak in their mid to late 20’s, yet he has taken strides to diversify his activities from strictly participating in competitions.

Building from his success and deeply-seated personal connection to horses, Lamaze has begun to increasingly focus on training and coaches young hopeful riders in the sport. As owner of Torrey Pines Stables, a world-class training facility in Schomberg, Ontario, Lamaze trains equestrian protégés like Caitlin Ziegler. The 17-year-old Wisconsin native became the youngest rider ever to place in last year’s International Ring, bringing in a tidy $31,000 cash prize.

“I would say I spend 80 per cent of my time teaching and coaching and the other 20 per cent riding,” Lamaze said in a released statement. The champion’s success in the competitive arena will continue to translate into invaluable training skills as Lamaze was ranked as the #1 rider by the International Equestrian Federation as recently as July 2010.

A statement released by Torrey Pines earlier in the year detailed the hopeful horse favourites to partner with Lamaze in London. Looking forward to the games, Lamaze is hopeful for what lies ahead. “Losing Hickstead was obviously very difficult, but with these new horses, the Olympics can now very much be a reality again,” he said earlier in the year. “I am really excited for the future.”