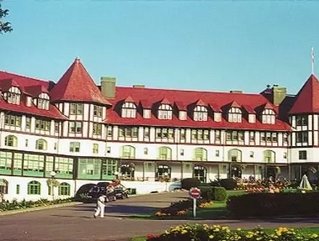 Made famous for its unique salt water baths, Atlantic seaside location, and restorative humidity free air, the Algonquin Hotel has existed as a sanctuary for Canadian tourists for over a hundred years. And with the recent relationship development with Marriott Hotels, the adored resort’s unique relevance could be preserved for generations of travelers to come.

A recent news release issued by the government of New Brunswick Canada reported a “Consortium negotiating to take over Algonquin Hotel,” and detailed the impending collaboration between New Castle Hotels – an entity with a strong operational relationship with the Marriott franchise – and Southwest Properties in managing the operations of the culturally embraced Algonquin Hotel.

The historic hotel-- a gorgeous Tudor style resort built in St. Andrews in 1889—is currently under the stewardship of the Government of New Brunswick, and has recently undergone a publicly discussed terminated operational relationship with Fairmont Hotels and Resorts. The recent consortium could make the illustrious Marriott chain the new operational owner of the historic property; however the ultimate decision is left up to the scrupulous discernment of the Crown.

The New Brunswick government has stressed the importance of the hotel in creating industrial profits within the province, “We recognize that the resort is a major economic generator for Charlotte County and the surrounding region,” said Tourism and Parks Minister Trevor Holder. “New Brunswick continues to be proud of the Algonquin as a tourism icon. We all want the same thing, a rejuvenated, revitalized Algonquin that will remain the jewel of the Fundy shores for decades.”

The 12th Annual Quebec Ice Hotel Opens to the Public

This commitment to the hotel’s legacy has spurred meticulous action on the part of the government, “Specific details will be negotiated during this due diligence period with a consortium that knows the resort and hotel business,” said Transportation and Infrastructure Minister Claude Williams. “We are entering into serious discussions with a joint-venture between New Castle Hotels & Resorts and Southwest Properties.”

If all goes to plan, the Algonquin Hotel will join the ranks of other enormously famed resorts and hotels as part of the Marriott’s Autograph Collection. “The unique heritage of the Algonquin will, upon joining the Autograph Collection, affiliate the property with some of the most distinctive hotel and resort destinations around the world.” David Buffam, New Castle’s chief executive officer.

While the government has played protector in guaranteeing the proper preservation of the famed hotel, the fate of the Algonquin ultimately relies on the operational integrity of its franchised owner. However, if a fleet of famous resorts, and decades of profitable success are any testament to future victory, than the hotel is in good hands, and the Marriott is bound to maintain the pristine legacy of the hotel for years to come.