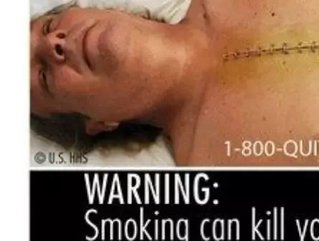 The Food and Drug Administration has been making some controversial moves as of late and has unveiled some pretty graphic imagery as health warnings. These images will be required to cover half of the front and half of the back of every cigarette pack sold in the U.S. by September 2012 and include nine different photos of what smoking can do to your health.

Imagine picking up your next box of cigarettes and seeing an image of a dead man with stitches going down his chest with the words, “Smoking can kill you” on the front. Another image shows a diseased mouth with the message, “Cigarettes cause cancer” and a third image shows cigarette smoke coming from a man’s tracheal tube and the words, “Cigarettes are addictive.”

The FDA is hoping that these images will deter buyers, but I can imagine it won’t have an effect on smokers who have been smoking for decades. Each warning label also has the nationwide “quit line” hotline printed, 1-800-QUIT-NOW.

The images will be rotated simultaneously among all cigarette brands and is the federal government’s effort to cut down the number of smokers in America; their aim is to decrease smokers by almost half by 2020. Dr. Lawrence Deyton, Director of the FDA’s Center for Tobacco Products says the agency is projecting that after the first year of the graphic warnings, more than 200,000 smokers will have quit. The labels are required under provisions of the law signed by President Barack Obama two years ago when the FDA was allowed permission to regulate tobacco products.