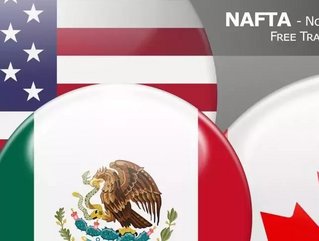 Talks between the US, Canada and Mexico on renegotiations of the North American Free Trade Agreement (NAFTA) are set to begin this week, where the three countries will come together to try and agree on a new look trilateral trading pact.

Talks are not expected to go particularly smoothly with US President Donald Trump having described the existing NAFTA terms as “the worst trade deal” that the US has ever approved.

However, although Canada may have to compromise, those present will also be looking to secure some key interests that could prove to be significant points of conflict or mutual benefit.

Few industries have supply chains as complex and broad as the auto industry, and with the sector having witnessed significant growth in Canada of late, PM Justin Trudeau and Co. will be looking to protect this during negotiations.

With the US increasingly looking to enhance its own domestic business, the President of the Automotive Parts Manufacturers’ Association, Flavio Volpe, stated his wariness that the success of its members is “increasingly dependent on our ability to reach US and Mexican customer bases,” and any implications to this could jeopardise what is currently a thriving Canadian industry.

Some 80% of the $355bn Canadian manufactured goods that were exported last year went to NAFTA countries, and so keeping this access open will be of paramount importance to the Canadian economy.

Canada at the very least will be looking to maintain the same degree of access, with the hopes of improving labour mobility and cutting administrative burdens.

Trump has already singled out Canada’s fixed prices, production quotas and tariffs that protect the Canadian dairy industry from foreign competition as a one sided agreement, and will be looking to eliminate these in line with US goals of broadening the country’s access to agricultural exports.

Meanwhile, Trudeau will be looking to maintain the current deal with all parties in a system that protects Canada’s dairy supply.

"We have signed significant trade deals with Europe, with North America, elsewhere, protecting our supply management system and we are going to continue to do that,” he said.

With Canada’s energy industry continuing to grow, the country now has the world’s third largest proven reserve and oil production has more than quadrupled since the first NAFTA talks.

With energy commodities acting as such a big part of Canadian exports, Canada is looking to make changes that ease the flow of energy across borders.