The global citizenship of Starbucks 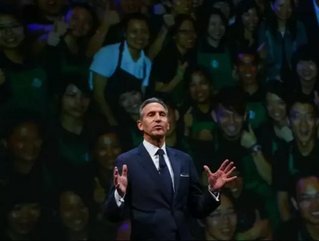 “What is the role and responsibility of all of us, as citizens?”

This is the question that Starbucks CEO and chairman Howard Schultz put forth to his employees and partners in late March, at the company’s 2016 Annual Meeting of Shareholders. It’s a question that expands on one he put forth at the 2014 meeting, in which he asked employees to consider the role and responsibility of a for-profit company on the global stage.

As a brand, Starbucks is no stranger to good citizenship. This year The Ethisphere Institute named Starbucks among its annual list of the World’s Most Ethical Companies for the tenth year in a row—one of only 14 to receive the recognition every year since the program started publishing its list.

Now with this evolution of his question, Schultz is advocating that it’s not only about the overarching mission statement of the brand itself, but also the daily actions of each and every person—from baristas to the executive team—which determines where a business stands in the world of citizenship and ethics.

It is one thing to ask employees to simply consider these issues in their daily lives, but during the same shareholders meeting Schultz and COO Kevin Johnson discussed several concrete plans to enhance the company’s efforts to create meaningful social impact and build a “purpose-driven” workforce. According to Schultz, this is a necessity for Starbucks to truly call itself an ethical business.

“There are very few consumer brands in the world – products or experiences – that have created both an undeniable customer attachment to the brand while also seeing universal acceptance. And, we take none of that for granted. We have to earn it every day,” said Schultz. “In addition to earning our customers’ trust and respect, we also cannot be a bystander at a time in our nation’s history when government gridlock, economic disparity and partisan polarization continue to stunt our progress. In our view, the private sector must contribute more as an economic and social force in partnership with all other sectors.”

One cornerstone of this year’s plan for a more conscious and purpose-driven Starbucks brand is its newly unveiled Starbucks FoodShare program, a strategic partnership with Feeding America to donate sandwiches, salads, and other ready-to-eat meals—products that would otherwise be thrown out at the end of the day—to food banks across the United States.

“Like many of our social impact initiatives, the innovation and inspiration comes from our partners who are volunteering in and contributing to their communities,” said John Kelly, senior vice president, Starbucks Global Responsibility, Community and Public Policy. “They saw the need for us to do more, and find a way to use our scale to bring more nourishing and ready-to-eat meals to those in need.”

Starbucks has high ambitions for the program, predicting that it will be able to provide five million meals within its first year. But the end goal is to reach a point where Starbucks is able to recapture and make 100 percent of all eligible food from its stores available for donation.

Looking to a future of fairer trade

Another key part of the plan for Starbucks is an initiative to increase sustainability in the coffee supply chain. As the company illustrated at its shareholder meeting, its Sustainable Coffee Challenge initiative is already seeing results. The One Tree for Every Bag campaign, produced in conjunction with Conservation International, is currently on track to place 20 million rust-resistant seedlings in the hands of coffee farmers this year alone. Drilling down from the efforts of the brand to its effects on the people working behind the brand, Starbucks is anticipating far reaching results for its campaign in the long run.

“In addition to the millions of pounds of green coffee this program will help farmers grow - helping to create economic stability for their communities and families - the development of seedling nurseries and a delivery infrastructure with supplier ECOM for the initiative will generate more than 1,600 jobs in the process,” the company announced. “An initial 11 million rust resistant coffee seedlings will begin to be distributed in Guatemala, Mexico and El Salvador in May ahead of planting season in each of these countries.  All of this work will be supported by Starbucks open sourced ethical sourcing program, C.A.F.E Practices, which offers agronomy information and tools in addition to financing for farmers worldwide in collaboration with Conservation International.”

The omnipresence of politics in this election year is impossible to miss, and it should come as little surprise that Howard Schultz has taken notice and made it a further people-mobilizing mission for Starbucks as well. In an effort “to strengthen democracy and elevate citizenship in America,” the company also launched its TurboVote project to support Democracy Works and engage more voters to participate—the brand and its partners, from Airbnb to Univision, hope to see 80 percent engagement of eligible voters by 2020.

In his keynote speech concluding the shareholders meeting, Schultz spoke to this mobilization, the power of people and his views on the future and what it could be. In his speech he addressed the concept of the American Dream—not as a rags-to-riches solo climb, with every man for himself, but as a collective reservoir of values and integrity in which rising levels lift all ships toward success.