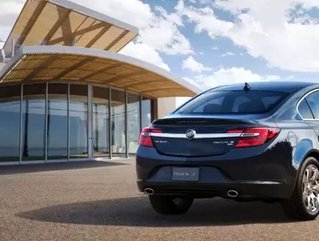 GM revealed today its 2014 Buick Regal which has been designed to feature sportier attributes and create a smarter evolution of Buick’s midsize sedan. A new turbo engine, all wheel drive and new technologies that offer a more fun driving experience as well as enhanced safety are just a few changes in the redesigned sedan.

“The new 2014 Regal is more expressive, more connected and more technologically advanced,” said Tony DiSalle, U.S. vice president of Buick Marketing. “Nearly half of new Regal buyers are conquests who are new to Buick and they represent the youngest median age among the brand’s lineup.

“The new Regal gives those discerning buyers more of the technologically advanced features they want in a modern luxury sedan, all with the style and refinement they expect from Buick,” continued DiSalle.

Another exciting feature for the 2014 Regal is Adaptive Cruise Control which can sense traffic in front of the vehicle to adjust vehicle speed or even stop in heavy traffic.

The Regal now looks more contemporary with the redesign of the front and rear of the car, plus the addition of wing shape LED daytime running lights and LED taillights.

The new 2.0L turbo engine will offer drivers 18 percent more horsepower in the 2014 Regal Turbo while the all-wheel-drive system is able to give the vehicle the best traction it can in all driving conditions.

GM will debut the 2014 Buick Regal at the New York international Auto Show and the vehicle will be available for purchase in Fall 2013.