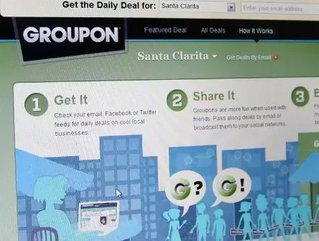 On Wednesday Groupon named co-founder, Eric Lefkofksy chief executive as a permanent replacement for Andrew Mason. Mason was fired at the end of February due to growing concerns about Groupon's financial standing.

Lefkofsky was chairman and interim co-chief executive, with Ted Leonsis, the vice chairmen since Masons swift departure from the company. Leonsis is now on track to be chairman.

Groupon is an online deals site and has a notoriously bad reputation for gouging businesses. The online deals conglomerate reported a second quarter loss of $7.6 million, or 1 cent a share. Earnings are down from $28.4 million or 4 cents a share, in the second quarter of 2012.

Adjusted earnings, which do not include stock compensation expenses, were 2 cents a share in the latest period and according to FactSet matched analysts’ expectations.

Chicago based Groupon, predicted adjusted earnings for the current quarter in the range of a loss of 1 cent to a profit of 1 cent a share on revenue of $585 million to $635 million.

The company plans to repurchase $300 million in stock in the next two years.

Groupon built its business on emailing daily discount deals for a plethora of different industries. The Groupon model has been known to be terrible for businesses that often have to cut their product or service price in half to run a deal with Groupon. Additionally, once prices are slashed Groupon generally pockets half the sale price of the deal, leaving merchants with only a quarter of the original revenue.