Head of Porsche to replace former Volkswagen CEO amid scandal 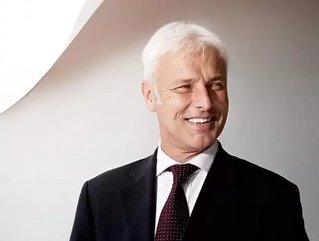 As the Volkswagen emissions scandal continues to spiral downward, the executive board of the German automaker company is working full-speed to minimize the spread of damage.

Yesterday, Martin Winterkorn stepped down from his position as CEO in “the interests of the company.” Accepting responsibility for the ordeal, he insisted that he personally had committed no misconduct.

Energy Digital previously reported who the rumored replacements for Winterkorn would be, but reports from The Wall Street Journal and Reuters have confirmed that Matthias Müller will take the role.

VW’s executive board said yesterday it expected “further personnel consequences in the next days,” according to Wired, and that “all participants in these proceedings that has resulted in unmeasurable harm for Volkswagen, will be subject to the full consequences.”

Müller, 62, has been running Porsche for nearly five years.

“I am shocked by the events of the past few days,” Winterkorn, 68, said in a statement released Wednesday. “Above all, I am stunned that misconduct on such a scale was possible in the Volkswagen Group.”

Winterkorn stands to take home an estimated $32 million pension, Bloomberg Business reported, along with the fact that the ousted CEO may also be eligible for two years’ worth of remuneration, if Volswagen determines he was terminated for no fault of his own.

Inside the emissions scandal

A report by the EPA and the California Air Resources Board states that Volkswagen has known for more than a year that American inspectors had discovered something unusual taking place with diesel cars made under the Volkswagen and Audi brands, according to NPR. The first discovery was made in May of 2014 when researchers found wide irregularities when they compared the diesel cars’ performance in emissions tests to real-world driving conditions.

RELATED TOPIC: What can businesses in the United States learn from Sears Canada losing its CEO?

Upon further investigation, it was discovered that when the 4-cylinder diesel cars detected they weren’t hooked up to widely used emissions testing equipment, they “emitted up to 40 times more pollutions than allowed under U.S. standards,” wrote NPR.

The violations, which affect nearly half a million vehicles, could result in as much as $18 billion in fines based on the cost per violation and the number of cars. Criminal prosecution is also possible.

The future of Volkswagen

Shares of Wolkswagen have plunged nearly 30 percent since the news of the violations, according to CNN Money, and the stock is now more than 50 percent below the 52-week high the company hit in March.

Do you think Müller’s leadership can turn that around and earn trust for the company once again? Share your thoughts in the comments below.