How Canada and the UAE are stepping up economic ties 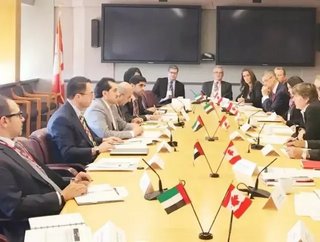 The first joint economic committee of the United Arab Emirates and Canada successfully concluded its first preparatory meeting in Ottawa, Canada. The meeting was chaired by His Excellency Engineer Sultan bin Saeed Al Mansouri, UAE Minister of Economy and the Honorable Chrystia Freeland, Canadian Minister of International Trade. The event also witnessed the participation and attendance of senior government officials from both countries.

Discussions during the preparatory meeting were led by H.E. Engineer Mohammed Ahmed Bin Abdul-Aziz Al-Shehhi, Undersecretary for Economic Affairs, and Christine Hogan, Deputy Minister of International Trade, in the presence of representatives from both UAE and Canadian representatives of various government institutions and agencies.

The meeting witnessed the discussion of the guidelines and framework for the increased mutual cooperation between the two countries, especially across key sectors like small and medium enterprises (SMEs), innovation and investment. Also talked about were key efforts to enhance cooperation in the fields of renewable energy, banking and financial services, education, health care, agriculture, food, cultural cooperation and airline services.

H.E. Al-Shehhi shared that the launch of the first joint economic committee of the two countries represents significant importance as it is tasked with the promotion of economic relations while also exploring potential opportunities in cooperation across common interest sectors--further reflecting a positive impact on the volume of trade exchange between UAE and Canada, wherein last year saw the achievement of over $2.1 billion in trade, including free trade zones.

He also pointed out that the joint economic committee constitutes the appropriate framework for the development of bilateral relations in accordance with the interests of the two countries through the implementation of an effective mechanism aimed at monitoring the decisions made in accordance to clear timetables, especially as they are held with the participation of a large number of government agencies and the private sector from both sides. Lastly, H.E. Al-Shehhi revealed that both countries are now also looking at ways to enhance cooperation in the fields of aviation and air transport.

Meanwhile, Deputy Minister Hogan spoke about the importance placed on the joint economic committee, which is tasked with building and developing a solid foundation of economic relations and to provide more facilities for cooperation among investors.

Hogan explained that the two countries share similar visions with respect to the further promotion of innovation and the development of the SME segment--adding that these two factors act as key drivers in the efforts to improve UAE-Canadian relations, particularly in strengthening cooperation and exchanging and sharing expertise.