Internet Voting -- Are We Ready? 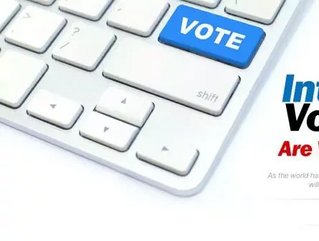 High tech is enabling elections. We see it in the ways candidates and the public communicate, in the manner question and answer sessions have migrated online, and in surveys reported through the media; often directly or during a televised event. Tweets, blogs, Reddit, comment tools and quick polls are now common place and have enabled politics and policies to be readily discussed and shared.

Politicians and the business of politics are fully entrenched online in the marketable aspects of an election. It would seem we should also be ready to enable our citizens with the 'right to vote' online.

As online technologies become reliable and part of the "mainstream", the question of when will Internet Voting or "i-voting" arrive for municipal, state/provincial and national/federal elections, gains momentum.

In fact, in a recent municipal election in Nova Scotia, Canada, a total of 26,949 voters cast their ballots online in the Cape Breton Regional Municipality elections, held this month. That represents 32.8 per cent of the 82,223 eligible voters (Cape Breton Post, October 16, 2012).

The municipality of Markham, Ontario, Canada is a pioneer in Internet voting. Their first i-voting pilot was in 2003. They are now leaders in paving the way for other governments to realize Internet Voting as an option for citizens to vote.

So what's standing in the way of adopting Internet Voting on a broader basis? If you can bank online you can vote online, right? In a September presentation, Harry Neufeld, Electoral Management Consultant and former Chief Electoral Officer for British Columbia, noted that "i-voting can successfully be held when those who oversee our elections can guarantee that the integrity of our electoral process is preserved." Neufeld explains that integrity includes:

Harry suggests that "We should be realistic and aware that a zero-risk election process does not exist, at this time. Today's Internet Voting pilot projects will need to be well-planned, documented and observed so we can all learn while developing i-voting standards and independent audit processes."

The Huu-ay-aht First Nations took the advice of experts such as Neufeld and Markham to heart. A pilot project using Internet Voting was planned for their general assembly in November 2012. The pilot project was intended to reduce travel and possibly increase participation for First Nations members. The Victoria Times Columnist reported that about 85 per cent of the First Nations members live off-reserve and that last year the quorum was lost before the end of the general assembly as people left for the long journey home. The pilot project has now been postponed to allow more time for administrative preparation.

Rob Botterell, Chairman of the Canadian Electoral Democracy Association (CEDA), who championed with the Huu-ay-aht on the pilot project says, "We need more than a few months to put Internet Voting in place. The usual timeframe for a municipality is 9-12 months." Botterell adds, "There is a great deal of administrative preparation required to ensure success. It's not simple to switch from paper to i-voting. The Huu-ay-aht wish to ensure that the first use of i-voting will be a success and will be received well by its citizens. You don't get a second chance to make a first impression. If i-voting did not work or there were glitches that would put things back for a long time."

Technology Suppliers Confident
From the success of pilot projects, such as Cape Breton and Markham, it appears that many of the technology risks of i-voting for a "local" election are in the process of being minimized. Valid concerns such as voter authentication and technical security can be overcome through rigorous and well-managed implementation processes.

And to some, Internet voting doesn't necessarily mean voting via a web browser on a personal computer. It can also mean voting through an app on an iPad or a smartphone, and in some cases through a telephone system -- like phone banking.

Internet Voting Adoption Imminent?
When will we see widespread Internet Voting on a local, provincial and federal scale in Canada? Many cities have announced interest and are in the planning stages for municipal pilot projects. Enabling legislation that will support i-voting is underway or being considered in many jurisdictions. Local champions of i-voting at the political and administrative level are also emerging, so it’s only a matter of time and political will before local i-voting could be an option for you.

At the provincial and federal level the question is not as easily answered and it appears more complicated if for no other reason than the scale of administering an i-voting initiative to such a large number of voters.

So when you sit in your local coffee shop or at home around the dinner table discussing the merits or real concerns you have about Internet Voting, I encourage you to discuss the type of leadership it will take to deliver i-voting for a province or a nation. Will the option of online ballots enhance the accessibility and equality of the electoral process? The technology can deliver, like online banking . . . and it's maturing quickly . . . and over time will be perfected. However, technology without leadership is meaningless, especially so in the case of i-voting. It is encouraging to see leaders such as the Huu-ay-aht and others being prudent with their entry into this arena and wanting to get it right. Leadership includes the ability to deliver what you promise . . . and the ability to say no until you can be confident that you can.