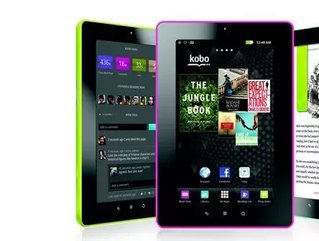 Kobo Inc, a Toronto-headquartered eReader technology company, has announced its business success that saw triple digit growth year of over year. Increasing its eBook downloads by 400 per cent and its eReader sales by 160 per cent; Amazon may have its work cut out for them in its Kindle’s future.  Part of Kobo’s success can be directly related to its Kobo ebook format that they make available for reading on multiple devices, giving customers real ownership.

“We’re thrilled to introduce Kobo’s open eReading platform and the Kobo ‘Read Freely’ philosophy to new countries around the world,” says Michael Serbinis, CEO of Kobo. “It’s become increasingly clear that the world of eReading is the way of the future and as technology continues to break down geographic borders, Kobo is excited to lead the charge into new markets and continue to shape the future of the multi-billion dollar eReading industry.”

Established a mere 28 months ago, this success is outstanding with an already competitive eReader arena. Kobo has in its short time created a user base of over 8-million registered users in 190 countries that utilize the Kobo eReading app, purchase Kobo eReaders and Kobo eBooks.

“Strong eReader growth is projected by IDC for the European market; with sales increasing over 400% to 9.6-million devices expected in market by 2015. We expect Kobo’s trajectory for international growth and user adoption to quickly meet and exceed market projections,” said Serbinis. “We have set the standard for helping our consumers engage in reading in new and meaningful ways, while delivering on our promise to help retailers, authors and publishers take advantage of this emerging market. In two years, we’ve done what others couldn’t in ten.”

Upcoming ventures for Kobo include its launch of products and services in Japan, Portugal, Spain and Italy. Over the past year Kobo was successful in launching its services in the UK with partner WHSmith, launched in France with partner Fnac and became the top eReader in the market, ranked as a leading Reader provider by Germany’s Computer Bild. After a successful 2010 launch in Australia and New Zealand, Kobo added new partners including Collins, JB-Hifi and Officeworks . This led to an increase in the company’s employee base, more than doubling its workforce which led to growth in Canada, the US, Ireland, the UK, Germany, Australia, Luxembourg and France.