Living in a Bubble: Life in the Spotlight for 2012 Olympic Sponsors 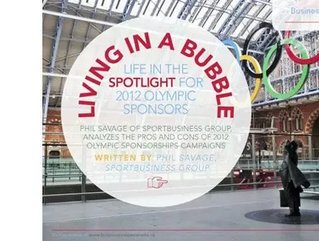 Staging the Olympics in London was always going to be a risk although not for many of the usual reasons. London’s ability to build venues, organise the logistics, sell tickets and generally put on a world-class show was never in doubt. Security might be high in the minds of some but the biggest risk was always with the media.

It is hard for non residents truly to appreciate what the London media environment is like. The British press is a force of nature which, in full flight, is a truly awesome phenomenon. Yet it is this beast that will determine the marketing success or failure of the companies who pay millions to associate their brands with the Olympics.

Part of the challenge lies in the values that the Olympic movement represents which tout such high ideals that it almost invites parody. Commentators make great sport highlighting the “hypocrisy” of all those involved in areas where they fall short of the Olympic rhetoric.

Keen Vancouver 2010 watchers will recall that sponsors fall into two categories: those in the International Olympic Committee’s (IOC) TOP Programme and national brands recruited by the local organising committee. Life will be generally easier for local sponsors like British Airways and (former state telecom monopoly) BT who have the advantage of being seen as patriotic.

Local partners do not avoid scrutiny entirely, however. BP has been criticised over its environmental record as has Rio Tinto, which is the company supplying the metal for the medals.

Confectionary brand Cadburys campaign linked to school sports equipment was greeted with howls of derision when journalists worked out the mountains of chocolate that would be consumed as a result.

The fortunes of international brands like Adidas and Dow Chemical recruited by LOCOG, have also been mixed. Adidas enjoyed/endured 48 hours of heat when it wrapped itself in a slightly blue Union flag to launch the TeamGB kit. Its inspired choice of designer Stella McCartney (daughter of Beatle Paul) proved decisive as her unimpeachable British credentials won the day for the brand.

Dow, by contrast must regret its decision to provide the wrap for the Olympic stadium. Protests from the Indian Olympic Committee over the company’s links to the Bhopal disaster have been a gift to critics who have held the sponsor’s feet to the fire for months.

Other IOC sponsors have also had had their triumphs and disasters. Timing brand Omega popped up to brand the countdown clock which promptly stopped, causing the company to duck back behind its brand ambassadors.

GE has majored on its status as a major British employer – a good call given the current uncertainty in the jobs market.

Visa has annoyed most Londoners with its deal to be the exclusive credit card for all ticket and merchandise purchases but as it takes a percentage on every sale is probably happy already.

P&G has favoured a message around motherhood designed to play well on social media which has probably not had the pick up it might have hoped. Additionally, the company simultaneously announced a huge cut in its ad spending which didn’t exactly endear them to the media moguls.

Given the mixed reaction to sponsors and the significant risk of brand damage one is tempted to ask ‘why do they do it?’ No doubt once the Olympics are over there will be the usual post-rationalisation by sponsors: I guarantee none will declare 2012 a failure. By then the media monster will have moved on to devour something else and a new town will be getting ready for the Olympic wagon train.

Phil Savage is Director at SportBusiness, a specialist media company for the sports industry. Join @sportbusiness on Twitter and checkout @SM_Frontiers our dedicated sports marketing feed.