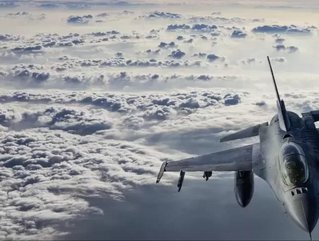 From late 2020, Bethesda-based aerospace and defense company Lockheed Martin will build all wings for its F-16 fighter jets in India, CNBC has said
Production will be conducted via a partnership between Lockheed Martin and Tata Advanced Systems.
“This is a strategic business decision that reflects the value of our partnerships with India and the confidence we have in Tata to perform advanced defence manufacturing work and deliver world-class products”, said Vivek Lall, Lockheed Martin’s Vice President of Strategy and Business Development.
The Hindu said this deal “positions Tata Advanced Systems Limited (TAL) to become the provider of wings for all future customers and strengthens their role in the F-16 global supply chain”.
The facility where manufacturing will take place is located in Hyderabad in the south of Telangana state, and marks the latest move in the bilateral defense trade between India and the US.
CNBC noted: “bilateral defense trade between the U.S. and India is estimated by the state department to reach [US]$18 billion by 2019. As recently as 2008, the figure was essentially zero”.
See More:
These plans will not necessitate the Indian Air Force selecting F-16s for its fleet, reports said.
“Lockheed Martin’s broader proposed F-16 partnership with India – to produce F-16s exclusively in India for the Indian Air Force and export customers – stands firm”, The Hindu added.
“Lockheed Martin and TASL announced last year that the two companies intend to join hands to produce the F-16 Block 70 in India if the aircraft is selected by the Indian Air Force”.
Lockheed MartindefenseTataF-16
Share
Share