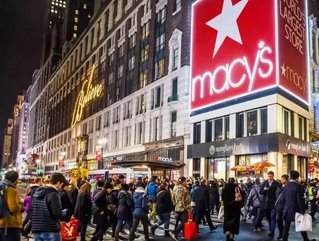 Macy’s Inc. has poached a senior eBay executive in a bid to streamline its highest management and quicken decision making at the struggling department store chain.

Hal Lawton is leaving his role as eBay’s Senior Vice President to become the President of Macy’s.

The retailer, which earlier this month reported its 10th straight quarter of declining comparable sales, said it hopes the move will streamline its highest ranks and speed up decision making.

Additionally, Macy’s hopes the move will give the company a skilled set of expertise in e-commerce at a time when growing online sales are critical against competitor Amazon.

Lawton will report to Macy’s Chief executive Jeff Gennette, who previously held the position of President.

In a statement, Gennette said: "Hal Lawton has deep expertise at the intersection of retail and technology, a diverse set of business experiences that give him a unique perspective, and a track record of successfully driving a change agenda at scale.

"With Hal on the team, we will accelerate the integration of digital both online and in our stores."

Starting on 8 September, Lawton will oversee all aspects of the Macy’s brand, taking on responsibility for tasks including merchandising, marketing, stores, operations, tech, and consumer insights, and analytics.

Before his employment at eBay, Lawton worked at Home Depot, and helped to turn the DIY-retailer into an e-commerce giant.

Earlier this week, the department store chain also announced plans to restructure its merchandising operations, which could result in about 100 job cuts.

Macy’s hopes that the management shakeup will help the company shed the bureaucratic culture that has caused it to fall behind in the retail wars.

Bloomingdale’s, part of Macy’s Inc., is mostly run an an independent retailer, with its own CEO Tony Spring.