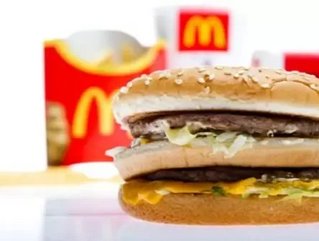 You may or may not have seen that picture floating around the web of the pink goo that resembles strawberry soft serve, but is actually scrap meat treated with ammonium hydroxide. The image is shocking and has served as a wakeup call for many fans of fast food.

(If you haven’t seen it, click here for a glimpse).

McDonald’s has been criticized for using ammonium hydroxide in its hamburgers and chicken products, but the company officially announced that it has put an end to the practice.

Ammonium hydroxide is used throughout the food industry as an anti-microbial agent, so that otherwise “inedible meat” can be consumed. The chemical, which is also used in fertilizers, household cleaners and homemade explosives, has been “generally recognized as safe” by the U.S. Agriculture Department, but that doesn’t make its presence in food less horrifying—particularly when the food is being sold by the world’s largest hamburger fast food chain, which serves about 68 million customers a day.

“Basically we’re taking a product that would be sold in the cheapest form for dogs and making it ‘fit’ for humans,” Oliver said on the show.

Although the company waited until recently to address the matter at all, it says that it stopped using the chemical in its food a few months ago and denies that its decision was influenced by Oliver’s campaign.

“At the beginning of 2011, we made a decision to discontinue the use of ammonia-treated beef in our hamburgers,” said Todd Bacon, McDonald’s Senior Director of Quality Systems. “This product has been out of our supply chain since August of last year. This decision was a result of our efforts to align our global standards for how we source beef around the world.”

McDonald’s certainly wasn’t the only restaurant chain to use the chemical compound. It’s commonly used in the food industry, both in meats and as a leavener in breads and cakes.

Ammonium hydroxide isn’t required to be listed on nutrition labels, so Sarah Prochaska, a registered dietitian at Barnes-Jewish Hospital in St. Louis says that the only way to avoid it completely “would be to choose fresher products, cook your meat at home [and] cook more meals at home.”

Here's more on ammonium hydroxide from Jamie Oliver's Food Revolution. Warning: some readers might find this clip shocking or distasteful: