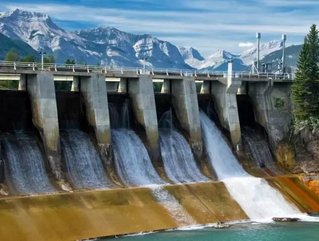 It has been announced that NB Power and Hydro-Quebec have inked three new deals, one of which stipulated help with the refurbishment of the Mactaquac Dam.

The dam, located in Mactaquac, New Brunswick, is a hydroelectric generating station capable of producing an electricity output of 670MW - roughly 20% of the province’s power requirement. Opened in 1968, the structure has started to deteriorate from long-term use, but the refurbishments are hoped to extend its operational lifespan until 2068. “We understand how important it is to ensure the long term sustainability of these facilities,” said Eric Martel, CEO of Hydro-Quebec, in reference to the vital role that hydroelectricity can play in the shift to eco-friendly energy sources.

A report by Natural Resources Canada found that an impressive 77% of electricity came from non-fossil fuel sources, “hydroelectricity is the largest renewable energy source in Canada, accounting for approximately 60% of Canada’s electricity generation”. Other renewables (wind, tidal, solar, etc) contributed an additional 3%, whilst nuclear energy added a slightly more substantial 14%.

Non-polluting: Since there are no fossil fuels used in the energy generation process, hydroelectric power plants produce only clean energy. Water falling over a turbine converts kinetic energy into mechanical energy, which is then converted by a generator into electric energy.

Local supply: Assuming that a region’s terrain and water are suitable for the necessary facilities, hydroelectric power can be a reliable, local and direct energy source for consumers which is not contingent on the fortunes of international fuel markets.

Reliability: Unlike some other forms of energy, hydroelectric energy is generally very stable during day-to-day operations. The generators used also have the ability to power up very quickly, making them effective as back-up or supplementary energy sources if required.

Among the world top four in terms of active hydroelectric power stations, Canada has 10 large-scale generators with a combined capacity of almost 12,000MW. One of the largest in the country - and also the world - is the Beauharnois generating station in Quebec, comprising 36 turbines creating 1,903MW of electricity and housed in an Art Deco design.

The great advantage of Canadian terrain is the bountiful supply of hydroelectric-friendly bodies of water, particularly running rivers. Although larger hydroelectric plants can cause environmental damage to the area they’re built in, or can be simply too impractical to construct in certain areas, smaller (≤100kW) systems can still be effective local energy suppliers - an article by Earth911 deemed that these ‘run-of-river’ systems have “a trifecta rarely found in energy production”: renewable, sustainable and inexpensive. As Canada continues to develop its hydroelectric capabilities, electricity companies across the country will undoubtedly see the opportunities afforded by this eco-friendly power option.