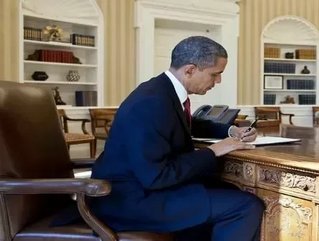 Obama’s presidential pen scrawled across important legislation yesterday, bringing a once hopeful bill into a righteous reality. The Jump Start Our Business Startups (JOBS) Act was made into a law yesterday, and it is already being celebrated -- by some -- as the biggest bipartisan measure in history. Entrepreneurs everywhere should rejoice, as the main aim of the law is to melt the infrastructural walls that keep small businesses from capital.

This measure will also allow average Americans to invest in small-businesses via the Internet without much interference; however who is protecting this new market of small investors?

Obama repeated his tried-and-true phrase, “I’ve always said that the true engine of job creation in this country is the private sector, not the government,” adding, "For startups and small businesses, this bill is a potential game changer."

The act promises to reduce regulatory restrictions that limit small-businesses from raising money. In particular, the new law will allow companies to raise up to $1 million dollars per year from any and all methods they wish to employ, as long as those portals are approved by the Securities and Exchange Commission (SEC).

Now average Americans can invest in a businesses right from their home computer, where previous investing was limited to wealthy individuals and banks.

However, some doubt the effectiveness of the SEC, who has received major flack for letting the Madoff- security bubble/ dot com bubble/ every-financial-crisis-in-history-fly. How are they supposed to regulate small timey funding and crowdfunding as well?

Obama’s $450 billion plan to get America back to work

This is what Obama said about the new IPO process: “Here’s what’s going to happen because of this bill.  For business owners who want to take their companies to the next level, this bill will make it easier for you to go public. And that’s a big deal because going public is a major step towards expanding and hiring more workers.  It’s a big deal for investors as well, because public companies operate with greater oversight and greater transparency.”

Overall this seems like great news for fresh start-ups, especially those who witness high-growth, as they will gain an extended grace-period leading up to becoming an IPO, and can also go public sooner than before. Also, the law eliminated the previous shareholder rule, which capped a private company at 500 shareholders – which forced businesses to go public before some were quite ready for the private to public transition.

With all this newly open terrain to operate businesses in, how can the average investor discern if a business is reputable or not? The JOBS Act has freed any scam artist to not only rob customers of money, but now investors, as state regulators are no longer in the picture to monitor the ethical conducts of businesses.

What this law does do however, is reflect the undeniable power of the internet in generating capital, and the wild-wild-west freedom available for business in the web’s limitless parameters.