Pink Slime Uproar Forces the Beef Industry to Fight Back 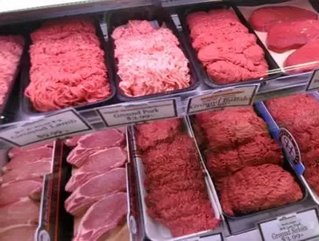 A couple of months ago, the words “pink slime” meant little to most Americans, as the general public was blissfully unaware of the prevalence of ammonia-treated filler in some beef purchased in supermarkets and fast food chains.

But after celebrity chef Jamie Oliver gave us a glimpse behind the beef processing curtain during an episode of his show, Jamie Oliver’s Food Revolution, reports of the practice and concern over pink slime spread quickly. The USDA and several industry experts spoke up to insist that ammonia-treated meat is safe to consume, but that didn’t erase the popular image widely believed to be the filler, oozing from a plant tube like strawberry soft serve, from the public consciousness.

(Click here for the image, if you think you can stomach it).

Throughout the last two months, the food industry has responded to communal concerns by pulling the product, referred to by the industry as lean finely textured beef, from shelves and kitchens. McDonald’s led the charge by announcing that it stopped using it last year and two of the country’s largest supermarket operators, Safeway and Supervalu, announced last week that they would stop buying it. The USDA stepped in earlier this month to say that it would allow school districts to opt out of serving it to students.

All this negative attention has taken a toll on the beef industry, and Beef Products Inc., the country’s top producer of lean finely textured beef, is not happy—particularly because it says that the pink slime uproar is steeped in myth and half truths. The private South Dakota-based company says that the circulating photo and description of pink slime actually depicts chicken filler and that its products are all made from 100 percent beef.

The company is trying to spread the word with a “Facts About Pink Slime” page on its new website, www.beefisbeef.com.

But this public education initiative might be a case of too little, too late for BPI. On Monday, it announced that it will shut down production at three of its four plants for 60 days.

“This is a direct reaction to all the misinformation about our lean beef,” said Beef Products Corporate Administrator Rich Jochum, adding that the temporary closure could become “a permanent suspension.”

Specifically, the private South Dakota-based company is suspending operations at plants in Garden City, Kansas; Amarillo, Texas and Waterloo, Iowa. The plant at its headquarters is the one continuing operations and about 200 employees at each of the other three plants will receive full salary and benefits during the suspension.

Barry Carpenter, CEO of the National Meat Association released a statement Monday to give his take on the situation.

“At a time when so many Americans struggle to put a healthy, nutritious meal on their family’s dinner table, the unfounded mischaracterization of lean finely textured beef as ‘pink slime’ is unconscionable,” said Carpenter. “I am sure the public is not aware of how widespread and potentially devastating the consequences of allowing public misconception to trump sound nutritional science are.”

The American Meat Institute also chimed in, uploading the following video to YouTube in an effort to educate consumers about the product: