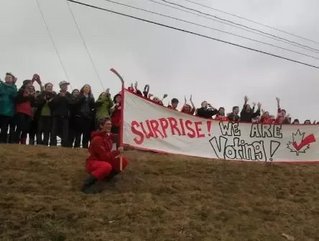 Rick Mercer, political satirist and blogger, ranted on March 29th that Canadian youth do not matter in elections. Stating that in Quebec, the dead have a higher turnout than the youth in some elections, his Youtube rant has become a call to action for Canadians aged 18-25.

18 vote mobs have materialized across Canada. Run by groups of students, the vote mobs are encouraging youth to participate in May’s federal election. The youth vote mobs started at the University of Guelph where a mob took place on March 31st. Since then, videos of students across Canada have appeared on Youtube. On Facebook, more Canadian youth are planning similar rallies and spreading the information through event pages.

“Rick Mercer challenged youth to vote. Rick, this one’s for you,” said a Youtube video documenting the University of Guelph’s vote mob efforts. “On May 2nd, Canadians hit the polls for a federal election. We’re waking up for this one.”

The University of Guelph’s vote mob video ended with an encouragement for other University youth, “Guelph is getting our vote on. Show us your campus will too.”

The question is, will politicians hear Canadian youth’s cry? Rick Mercer’s rant stated that Canadian youth are the least targeted when it comes to targeting votes and that political parties like it that way.

So Canadian youth, will you get out and vote this election? Will you follow your peers in generating excitement for turning out for the vote? It will be interesting to see who shows up on May 2nd to the polls.