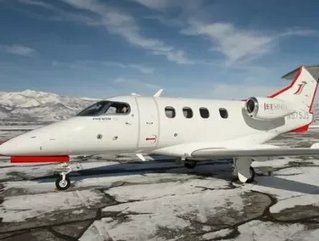 Jetting off on a spur-of-the-moment vacation is always a good idea. And it becomes even better when you’re sitting comfortably in leather, sipping on a cocktail with three of your favorite friends, and chatting with the pilot – in your very own private jet.

JetSuite is one of the newest up-and-coming private jet companies that offer luxury travel at a price that doesn’t break the bank. We sit down with founder Alex Wilcox about the company and what you can expect when you climb aboard.

What is your professional background?

I’ve had my pilot license since I was 16 and I always knew I wanted to travel. I was an intern for Southwest Airlines in college, worked as an airplane dispatcher, worked for Virgin Atlantic in Customer Service in Miami. I transferred to their headquarters to run their upper class products where I learned all about luxury travel.

While at Virgin, I met David Neeleman who was trying to pitch Richard Branson with what turned into JetBlue. I helped David build JetBlue from day one and I was one of the company’s first employees. Six years later, I had the opportunity to move to India to start King Fisher Airlines for liquor baron Vijay Mallya, which is now today’s largest private airline there. When I came back to the states, I was looking for the next big thing and learned about the Embraer Phenom 100. I thought that the jet would be an amazing opportunity for a new business model for private jets, and in 2008, I created JetSuite.

What was the inspiration behind JetSuite?

What I learned from Southwest Airlines was how to operate efficiently like a low cost carrier. The biggest lesson I learned was to operate one kind of aircraft so that all of your pilots and mechanics can work on your entire fleet. At Virgin Atlantic, I learned about luxury and offering the best amenities to passengers. We had to innovate luxury to get people more than what they expected and beat what your competitors can offer.

At JetBlue, we learned how to provide a better product at a lower cost. I tried to leverage all of my past experiences into something new with the Embraer Phenom 100, which despite its small size, is perfectly suited to serve 70 percent of the private jet market, which fly less than 2,000 miles and have fewer than five passengers on board.

What is the type of clientele you’re gearing these services to?

There are the traditional users who love us because they’re getting the same experience but at the fraction of cost. We want to grow the private jet market tremendously to also include business people who currently fly commercially to cover their territories. In a Phenom, you could reach two to three cities in one day. There are some locations that business people need to reach, but commercial planes don’t have access to. Our jets could reach up to four locations if passengers wanted to.

We also cater to leisure and weekend travelers, like even bachelorette parties who can afford the option of flying private. There’s no one demographic; it’s all about who has $1000 to spare and who needs to get somewhere in the fastest way possible.

How is JetSuite different from other private jet services?

We are, if you will, the Southwest Airlines of private jets. We display our brand on the outside of our jets and we can fly up to 2.5 hours at a time. What makes us luxurious is the time you same traveling. We’re not about the fussiness when you fly. We’re like every man’s private jet – everything you need and nothing you don’t want.

Our jets have a taller and wider cabin than others, are far more efficient, and burn less gas than others. On board, passengers are sitting in a BMW-designed interior with more head and shoulder space than other jets. There’s XM Radio in every seat, free drinks and snacks, and a flushing lavatory.

We offer some of the best trained pilots with some clocking in more than 6,000 hours each; some of our guys have more than 24,000 hours of flight time. We offer jet travel at a fraction of the cost and with no compromises.

No one can touch our prices. Passengers can pay by the day, or by the flight if they’re just going to one destination.

Tell me about the SuiteKey Membership. What is required to become a member?

Unlike most of our competitors, there is no upfront commitment to become a member. For people that want a good deal and who fly frequently, they can use our discounting program, where if you put money down, we give you a bonus in flight credits. We give passengers an extra 13 percent for every $200,000 down. For instance, you’ll get an extra $26,000 in flight credits for each $200,000 you put down and the increments go down from there. It’s a very popular program with no monthly or yearly fees.

Members also get higher access to the fleet and priority over other non-member clients.

How will the company expand its destinations?

World denomination is in our sights. We’re in conversations with representatives in Australia and India to offer our members access to their fleets when they’re abroad. Two-thirds of the population lives on the east coast so there’s no doubt we’ll open up shop there.