Quentin Tarantino Unchained: The Making of an Entrepreneur 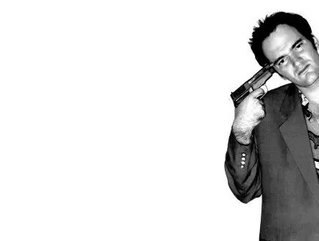 Whether you love him or hate him, Quentin Tarantino is one of Hollywood’s most successful all-around talents. He writes, produces, directs, wins awards for every film and has a healthy bank balance to prove it.Nevertheless, Tarantino had to put in time to earn his success. Never losing sight of his vision of becoming a director when he started out as a Video Archives clerk, Tarantino has gained  his place not only as the master of violent, cerebral, Asian-inspired cinema, but as a modern day entrepreneur who knew what he wanted and didn’t take no for an answer.

Tarantino’s appeal is hidden in plain sight. It’s easy to love his twisted takes on genre and the beauty of the eccentric characters he creates. However, he also represents the dreamer in all of us and ascended beyond fandom to become a creator. He is the promise of every self-starter who has even a shred of ambition to strive and accomplish their aspirations, no matter how grand and daunting they may seem.

He’s proof that you can be heralded for doing what you love, exactly the way you want to do it. His existence and dominance, like other entrepreneurs, proves that it can be done.

“If you want to make a movie, make it. Don’t wait for a grant, don’t wait for the perfect circumstances, just make it.”-Quentin Tarantino

Born in Knoxville, Tennessee, Quentin Tarantino is the only child of Connie McHugh and actor Tony Tarantino, who left the family before he was born. Moving to California at the age of four, Tarantino developed his love for films at an early age. He had a passion for storytelling and showing his creativity in unusual ways. “He wrote me sad Mother’s Day stories. He’d always kill me and tell me how bad he felt about it,” his mother once told Entertainment Weekly. “It was enough to bring a tear to a mother’s eye.”

As a teenager Tarantino loathed school, choosing to spend his time watching movies or reading comics rather than studying. By the time he was 16 years old he had dropped out of high school to study acting at the James Best Theater Company. After two years, however, he grew bored and left. From there he worked odd jobs including ushering at a adult theater, before finding his niche as a clerk at Video Archives, a now-defunct video rental store in Manhattan Beach. This video store is where Tarantino would develop and master his encyclopedic knowledge of films as well as meet his future producing partner Roger Avary, who later collaborated on several screenplays with Tarantino.

During his time at the video store, Tarantino worked on several screenplays, including True Romance and Natural Born Killers. In 1990, Tarantino left his video clerk job to work for the production company Cinetel. Through one of the producers there, he was able to get his script for True Romance in the hands of director Tony Scott. Scott liked Tarantino’s script so much he bought the rights to it. After receiving the $30,000 up-front payment for his first sale of the script, Tarantino was anxious to direct his first movie. Not wanting to wait for some future day of Hollywood financing, he decided to take the True Romance money and parlay it to make a 16 mm “garage style no-budgeter”. The story goes that Tarantino’s producer, Lawrence Bender, read the script and asked Tarantino for one month find more money to produce the film appropriately. Then in a rare and astonishing set of events, Bender got the script to a friend of his who was the aerobics instructor for Harvey Keitel’s then wife, Lorraine Bracco. Bracco passed it on to Keitel just before the couple split. This combination of hustle and fate led to Tarantino snaring Keitel as the movie’s executive producer, and upping the budget to $1.5 million. Reservoir Dogs became a reality.

Reservoir Dogswas released in the fall of 1992 in 61 theaters and grossed $2,832,029 at the box office. After its mega success, it was shown at the Sundance Film Festival. Empire magazine named it the “Greatest Independent Film ever made.” Not bad for a wannabe director and high school dropout.

You hear it time and time again: people want to do business with people they like. And while this is true in a sense, you also have to believe in what you’re doing and remain yourself. Tarantino does just that. When asked about the making of Reservoir Dogs, Tarantino stated, “This movie was never meant to be everything for everybody. And I don’t mean that as a slam. I’m just saying I made this movie for myself and everybody else is invited.”

The same should be said for entrepreneurs. You don’t start a business to please others, nor do you wait for the perfect opportunity. You do it because you believe what you’re doing is special and you make it happen no matter what. Tarantino embodies this and exuberates the true meaning of what it is to be an entrepreneur. If you want to run your own business, get out there, make mistakes and just do it. That’s how great business people are made.

When Tarantino was writing the script for Pulp Fiction he worked with Linda Chen, an unofficial script consultant and close friend.  Although Tarantino has stated his first drafts for Pulp Fiction looked like “the diaries of a madman,” Chen says they were much worse. In a Vanity Fair article she stated, “His handwriting is atrocious. He’s a functional illiterate. I was averaging about 9,000 grammatical errors per page. After I would correct them, he would try to put back the errors, because he liked them.

Produced for $8.5 million, Pulp Fiction raked in $214 million worldwide, making it the first independent film to gross more than $200 million. The film catapulted Tarantino’s career into a new universe, solidifying him as a legitimate filmmaker while also changing the face of modern cinema.  For an independent film it broke all the rules. Roger Ebert called it “the most influential” movie of the 1990s. Janet Maslin wrote in The New York Times, “It must be hard to believe that Mr. Tarantino, a mostly self-taught, mostly untested talent who spent his formative years working in a video store, has come up with a work of such depth, wit and blazing originality that it places him in the front ranks of American filmmakers.”

Like anything that’s innovative and new, there’s denigration. Tarantino has been criticized for everything from the crude, profanity laced dialogue of his characters to the intense violence he portrays in his films. He has come under fire from a number of critics for “borrowing” excessively from other filmmakers and has been involved in a slew of controversies from gun violence to racial epithet. When asked about the violence in his highly stylized revenge flick Kill Bill, the director replied in classic Tarantino fashion-- "Sure, Kill Bill's a violent movie. But it's a Tarantino movie. You don't go to see Metallica and ask the fuckers to turn the music down."

Right there says everything you need to know to be an entrepreneur. Quentin Tarantino’s humble beginnings serve as a beacon of hope to anyone that has ever failed, been rejected, neglected or distrusted. His story is as easily about business development and entrepreneurialism as it is a guy writing manuscripts with an average of 9,000 grammatical errors per page. There is nothing more inspirational than a mad genius.

If you’ve ever had an idea that lacked support from the world, this retrospect is a reason to give it another go.  There’s no perfect time to launch a business, just perfect passion.