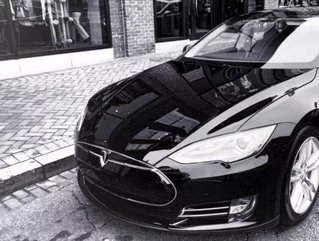 Elon Musk proves that Tesla really does have SEX appeal.

It’s official; the new affordable Tesla will be called the Model 3 and will be available to buy in early 2017.

During an interview with British car magazine Auto Express, Elon Musk revealed that the new electric car will cost in the region of $35,000, about half as much as its top-rated Model S.

“I can confirm that the next vehicle Tesla will produce after Model X will be a mass-market electric car known as Model 3,” said Liz Jarvis-Shean, a Tesla spokesman.

“I thought this is crazy, Ford’s trying to kill sex,” Elon Musk told Auto Express. “So we’ll have to think of another name.”

But the company still managed to inject a little sex appeal into the range.

“The new model is going to be called the Model 3,” Musk said, "We’ll have three bars to represent it and it'll be S III X”

The Model 3 will be Tesla’s third generation battery-powered vehicle and last year Musk revealed that the car and its battery would be 20 percent smaller and could go 200 miles on a single charge. He also said it would be half the price of the $71,000 Model S.

“In order to achieve that, you better reduce the cost of the battery,” Musk is seen saying in a video. “Since the car is 20 percent smaller, you’ve got to get a 50 percent reduction.”

It is thought that Tesla’s gigafactory will help the company reduce the cost of battery production. In fact by 2020, Tesla expects the battery assembly plant to produce more lithium-ion packs in a year than were created in the entire world in 2013.

However critics say that the Model 3 could get pushed back owing to the current production backlog.

According to the Huffington Post, Tesla is already behind with the Model X, an SUV-crossover, which will go into production next year. “We don’t like to carry inventory,” Diarmuid O’Connell, Tesla's vice president of business development, told the Huffington Post at the time. “We’ll be delivering as soon as we produce.”

Until then, the Model 3 - which was supposed to debut in 2015 - is a back-burner priority.

“Our focus continues to be on Model S and preparing for the introduction of Model X,” Jarvis-Shean said.