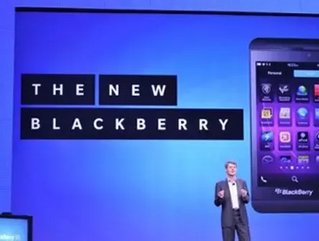 "This is one of the biggest launches in our industry and today is not the finish line, it's the starting line," said RIM CEO Thorstein Heins at the press conference.

One feature everyone’s talking about offered on the BlackBerry 10 is called Balance. The feature is perfect for professionals who want to use their phone for both business and pleasure and can do so through a swipe gesture that switches between “work” or “personal” profiles. What Balance does for businesses, RIM claims, is keep data secure without the need for employees to use two smartphones.

Another feature offered on the BlackBerry 10 OS is Flow which allows users to switch between apps easily through finger gestures, improving the overall BlackBerry multi-tasking experience.

In the smartphone world, your phone is only as good as the apps it offers. RIM announced today that BlackBerry 10 offers users over 70,000 mobile apps with big names among the mix including Skype, Amazon Kindle, SAP, Angry Birds, NHL, Tim Hortons, Air Canada and more.

The BlackBerry Z10 releases in Canada on February 5th and will retail for approximately $149.99, while the Q10 is expected to launch sometime soon after, although has no announced release date yet.

Other important announcements made at the launch included RIM’s official corporate name change to BlackBerry. BlackBerry will be traded on the TSE as BB and as BBRY on NASDAQ.

"This change from Research In Motion to BlackBerry comes at a defining moment in our company's history," said Thorsten Heins, President and CEO. "RIM created the first BlackBerry smartphone and changed the way millions of people around the world stay connected. We have used that same ingenuity and innovation to redefine mobile computing with BlackBerry 10. As we launch BlackBerry 10 around the world, now is the right time to adopt the iconic BlackBerry name."

"Alicia Keys has come to BlackBerry because she believes in the product and technology, and subscribes to our overriding philosophy to 'Keep Moving': to empower people through mobile computing and communications," said BlackBerry President and CEO Thorsten Heins. "We are excited she will be bringing to us her enormous capabilities, as well as a vast network of relationships in the entertainment, social media and business communities, to help shape our brand and grow our business."